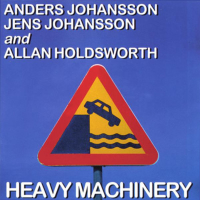 Remember Jan Hammer and Jeff Beck jamming together with lead tradeoffs ad infinitum, ad nauseum, ad libitum, forever amen? If not, just read on. You other nostalgic ones out there will at first hear many similarities in guitar legend Holdsworth and keysman Jens Johansson spring boarding off each other. A big difference soon unfolds — this duo just plain smokes, cutting early into the fast lane and getting right down to business. Things overall, are compositionally interesting, noticeably precise, big and phat, just more intriguing than those Hammer/Beck excursions. It immensely helps havin' monster-everywhere drumming, a veritable demon-wind blowin' at their backs like Anders Johansson kept rock steady.

It was refreshing to hear Holdsworth get funked up and get in a rockin' groove thang for a change on many cuts.I thought I heard him having fun on this CD. Even his guitar tone seemed bigger — perhaps augmented in places with some background triggered synth-echo delays and textures. Jens Johansson was outstanding in his mosaic of keyboard styles and voicings. I swear that guy is the only synth player I've ever heard nearly duplicate a signature Holdsworthian lead phrasing. Incredibly well-done! An expertly interwoven synthesis of sound and rhythm tickled my critical ears throughout. Great jazzrock, mean and nasty, ballsy-bluesy fusion happens here. This is no CD for vapid, sappy, languishing toe-tapping weenies. It kicks.

Holdsworth fans, this is a must. Keyboardists and drummers need this in their inspiration collection. Rockers and jazzrock fusionists alike will delight in this recording. I take this opportunity to say, "Jens and Anders, thanks for such a good idea expertly realized in your building this Heavy Machinery." Highly recommended jams.