By IAN PATTERSON
February 20, 2014
Sign in to view read count 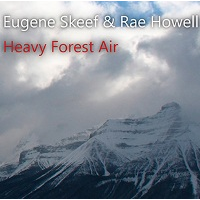 The key words of the sparse liner notes are "created live," as Heavy Forest Air documents improvisations between percussionist/multi-faceted artist Eugene Skeef and vibraphonist/multi-instrumentalist Rae Howell, in the Rolston Recital Hall of the famous Banff Centre, Alberta, Canada. There were no charts and no overdubs—just two musicians responding to the evolving stimuli of the moment. The three pieces—two long improvisations and one short one—feature Australian Howell on vibraphone and marimba, and South African Skeef on a range of skin and metal percussion. Thankfully, sound engineer Jared Miller hit the record button to capture these spontaneous improvisations because it's evident from the fluidity and nuance of the dialog that the two musicians are well and truly in the zone.

The title track is a twenty four minute-marriage between Howell's interlocking lines—first on marimba then on vibraphone—and Skeef's rhythmic and percussive variations. A repeating series of sixteen descending notes combined with a circular pattern commence the duo improvisation, with Skeef responding—on what sounds like the ancient Indian clay-pot, the ghatam—with a vibrant pulse. Skeef's rhythms ebb and flow as Howell's lines oscillate in tempo and intensity in a fascinating evolution that's alternatively metronomic and flowing, ethereal and subtly dynamic.

Switching to vibraphone, Howell runs bows along the edges of the keys, to which Skeef responds with an isolated gong, gentle water ripples and a deep whale-like groan, presumably caused by rubbing the skin of a large standing drum. From ghostly, other-worldly soundscapes, Howell's play gradually assumes greater lyricism and there's a return to the earlier rhythmic momentum, with Skeef this time on congas. The dialog slowly dissipates and fades altogether.

The second improvisation, "Ocean Of Emptiness" logs in at just under nineteen minutes and although there's no great divergence in approach from the first piece, its greater melodic core gives it the impression of a through-composed work. Percussion and marimba remain in step until around the five-minute mark when Howell's notes slow down to a crawl as Skeef's ghatam gathers pace; the juxtaposition is brief but striking. Percussion then rests for a minute as Howell strikes up contrasting, mantra-like motifs.

When Skeef rejoins, his charging Arabic rhythms contrast with Howell's minimalist vibraphone pulse. Drums fade, ushering in another dreamy vibraphone passage punctuated by the sounds of water and gentle gongs. The sure patter of frame drum injects greater urgency, though Howell maintains her less-is-more course, albeit an overtly melodic one. Howell then drops one line, gently releasing three-note cycles followed by six-note cycles that, buoyed by percussion, impart a vaguely Latin vibe. Howell returns to the three-note pattern, the sustained notes shimmering as drums recede and the whale-cry reverberates deeply once more. Vibraphones and a small gong chime single notes in call and response, running down slowly like a broken clock.

At under four minutes, the structurally simple "Restless Woodland" seems like a summation of what has come before—a short coda that's as delicate as a lullaby. The orchestral elegance of these epic flowing narratives and the striking contours of rhythm and mood would suit an arrangement for the multiple voices of Howell's longstanding Sunwrae Ensemble. It's easy to forget that Skeef and Howell's collaboration is an improvisation, so assured is the interplay. Once heard, however, this beguiling music sears itself in the memory.