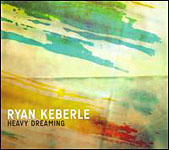 Brass band-oriented projects seemed to be all the rage in 2009. Dave Douglas, leaning on the work of Lester Bowie and the heritage of the Crescent City, garnered great critical acclaim and artistic success with his Brass Ecstasy project. Saxophonist David Binney created a mysterious and intriguing blend between a guest brass section and his core quartet on Third Occasion (Mythology Record, 2009). Trombonist Ryan Keberle is now hot on their heels with Heavy Dreaming, featuring his Double Quartet—piano, drums, bass and trombone, augmented with a brass quartet. While each of these three individualists presents vastly different music with their groups, their use of brass ensembles binds them. It might even be convenient to assume that Keberle is jumping on the bandwagon with this album, but he actually beat Douglas and Binney to the punch.

Double Quartet (Alternate Side Records), Keberle's debut as a leader, introduced the ensemble in 2007. It might be assumed, with this chosen wording, that clear lines are drawn between the two quartet factions, but this couldn't be further from the truth. While Binney's brass-infused project had a great separation between the two distinct groupings and Douglas' band is one band with a large contingent of brass players, Keberle's work falls somewhere in the middle. The writing is seamless and the brass is used in a natural and organic fashion. Sometimes it serves in a big band-like capacity, moving along together and emphasizing hits in different places, but it also serves other purposes. "One Thought At A Time" gives the brass players a chance to connect their melodic lines and finish each others' thoughts, as jubilant strains of sound pass from one instrument to the next. In contrast, a hymn-like reverie comes forth from the horns as they introduce a gorgeous, gospel and blues-tinged take on Duke Ellington's "I Like The Sunrise."

Bassist Matt Brewer is a scene stealer here, whether providing rock solid support, performing quirky unison lines with pianist Frank Kimbrough, or soloing. Trumpeter Mike Rodriguez puts emphasis on his rich, lower register work and proves to be one of the more potent soloists throughout the album. Marcus Rojas is the common denominator between Douglas' band and this group. His tuba often holds down the fort in a more traditional manner, but he also has a chance to shine on the veritable low-end solo feast that is "The Slope Of A Blues."

The music of The Beatles played an important part on Keberle's debut, with covers of "Norwegian Wood" and "Blackbird." Here, he finishes the record off with a well-crafted arrangement of "Mother Nature's Son." Keberle's broad compositional ideals, along with his superb ability to balance the big and the small within his band, helps place Heavy Dreaming in a class of its own.