Dave Gold: Heaven On Their Minds 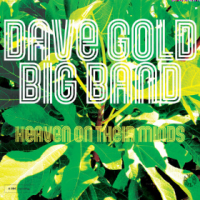 Dave Gold may not have the big-name bandleader or arranger status of Buddy Rich or Nelson Riddle, but Heaven On Their Minds shows that his own talents, and those of his Big Band compatriots, are no less for this lack of recognition. In fact, Gold's successes were often under the radar—as a composer and arranger of library music for labels such as KPM, which provided theme tunes and incidental music for some of the most popular TV shows in the UK.

Heaven On Their Minds consists of four tunes recorded by Gold's big band in 1974 and broadcast in August of that year on BBC Radio 2's Jazz Club. The band is filled with some of the top jazz players of the time, including baritone saxophonist Ronnie Ross and John Dankworth sideman John Girvan, and these four tunes ably showcase the outfit's abilities.

Andrew Lloyd-Webber's "Heaven On Their Minds"—from Jesus Christ, Superstar—moves at a rip- roaring tempo, driven by Les Hurdle's bass guitar. It's a powerful opening statement, laying down the band's swing credentials. "O'Connell Street," one of Gold's two compositions, is named after one of Dublin's most famous thoroughfares. The tune doesn't really evoke any Irish images but it does give a sense of bustle and rush, a strong bass pulse underpinning hard-hitting brass ensemble playing. There's a fiery trumpet solo and a breezier one from the flute (unfortunately, individual soloists aren't credited), plus a light, cheery, opening and closing melody. There's a clear, if unusual, connection between the two tunes on side A—Gold was the musical director for the Dublin production of Jesus Christ, Superstar in 1973.

Jimmy Webb's "Pocketful Of Keys" is taken at mid-tempo. Gold's arrangement uses the band's full line-up without overpowering Webb's melody and gives the main solo to the flute. There's some of the sadness to be found in Webb's own version, or Thelma Houston's recording, but it soon gives way to a more upbeat vibe, epitomised by the flute solo, before Harold Fisher's drum break moves the band close to hard rock territory. "Nostalgia (Ain't What It Used To Be)" opens in a bluesy mood, led by the tenor saxophone. It soon moves up a gear with some funky bass, wah wah guitar and fruity trombone. Then there's another shift, muted trumpets and electric piano briefly giving the tune a more sophisticated feel before Fisher's drum break signals a return to funk.

Heaven On Their Minds is released on high-quality vinyl as a limited edition of 500 records. For a music lover who spent many teenage hours in the early-70s watching British TV dramas and cop shows Heaven On Their Minds evokes genuinely warm and fuzzy feelings of nostalgia. But that's not all. This is an exciting, vibrant, big band playing some great charts and its appeal goes well beyond a nostalgic older generation.

Side A: Heaven On Their Minds; O’Connell Street. Side B: Pocketful of Keys; Nostalgia (Ain’t What It Used To Be).

Title: Heaven On Their Minds | Year Released: 2017 | Record Label: My Only Desire Records