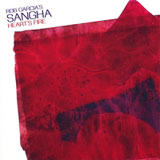 Drummer/percussionist/bandleader Rob Garcia's Heart's Fire, with his group Sangha, may initially be reminiscent of the music of Black Jazz Records, a 1970s-era label that focused on original soul-jazz, but further listens reveal something more.

The word "Sangha" is a Buddhist term that comes from the Three Treasures roughly translating to "the community of Truth seekers." The group is well represented by, alongside Garcia, flutist Michael Gentile, saxophonist Adam Kolker, guitarist Kenny Wessel, pianist Daniel Kelly and Dave Ambrosio on bass, in addition to vocalist Yoon Sun Choi, a strong-voiced singer who appears on almost every track. The lyrics are not particularly meaningful, but they offer a good reason to hear Choi, a definite asset to the group.

Garcia's original lines are delivered nicely by the front line in a bracing manner (another reference to Black Jazz). The only tune that is clearly intended to be a breakout for the group is "It's Ruby" which, after a very brief vocal intro by Choi, goes into full-tilt Latin jazz mode for a nine minute excursion. This is exciting music and Garcia's band seems most comfortable showing their prowess.

Beginnings; Is It Me; It's Ruby; Heart's Fire; Coming Home; Sangha; Be A Lover; Fresh; Thank You.