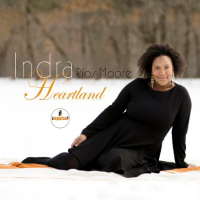 The idea of the journey is a motif that is often found in music. If you go back to the blues, gospel and old-time music, these are musical traditions that are filled with songs about restless people on the road, trains, cars and feet moving through a landscape. It can be a physical journey, moving from A to B, but often, it is just as much an inner journey towards peace and salvation or an escape from a haunting past.

The New York-born singer Indra has been on a musical journey for a long time. In the liner notes for the album Heartland (Impulse!, 2015), she explains how music has always been a sanctuary and the act of singing has helped her moving into an emotional space: "where the mind doesn't interfere." On this particular album, the space is inhabited by songs that have meant a lot to the singer: "These songs are all songs that traverse the territories of the heart. They are tunes that helped me and gave me space to rest even in the middle of the whirlwind of life."

The whirlwind that the singer refers to is the death of her mother and the birth of her son. The complex relationship between life and death, joy and sadness, is a motif throughout the album, along with the journey. The singer and her small band, with saxophonist Benjamin Traerup, bassist Thomas Sejthen and guitarist Uffe Steen 3, supplemented by the empathic drummer Jay Bellerose, draw from a deep well of songs, everything from gospel, blues and old-time music to David Bowie, Pink Floyd and Duke Ellington.

It is a diverse repertoire, but the different songs are unified by the warm, intimate, acoustic sound of the band. It is soulful and sparse, but also sophisticated and jazzy. Indra simple peels off the layers of time and distance from the songs and she brings them back into the heart of humanity. An example is the band's stunning interpretation of David Bowie's grandiose song "Heroes" that is transformed into a slow, glowing ballad, with Benjamin Traerup's spiraling saxophone and an earthy rhythm section. The song becomes a narrative of sadness, beauty and redemption and this could be said about the whole album. It visits an emotional heartland without any trace of irony.

This is honest music, music from the heart. It might be that Indra and her band are still on a musical journey, but on this album, with the help of Jay Bellerose and producer Larry Klein, they have arrived to a truly special place.