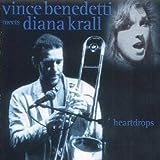 The true novelty of this recording lies more in hearing a younger, greener, less polished Diana Krall than the specific results of her collaboration with trombonist Vince Benedetti. Heartdrops is a 1990 studio recording that occurred after a fortuitous meeting between Benedetti and Krall and a series of dates in between.

What I can hear is that this is not the same Diana Krall who appeared on the CD/DVD Live in Paris. She is still tempering her craft on this recording. Benedetti, for his part, demonstrates his singular genius in composition and arrangement. He provides Krall (and guitarist Martien Oster) a lush, almost Bossa carpet, over which to sing. In the best way possible, these songs sound like lounge music—which in itself is not bad, just not the best one can expect by listening prospectively from this recording toward the more contemporary recordings by both artists. As such, this is a unique historical document, illuminating the early talents of the exquisite Ms. Krall.