The Bo-Keys: Heartaches By The Number 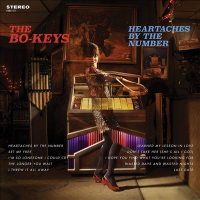 There is an ongoing resurgence in retro-soul music, as contemporary artists emulate the style and sound from the golden age of soul and rhythm and blues. But there are still many of the original musicians from that era out there doing it, of which The Bo-Keys are a primary example. Delving deep into the sub-genre of country/soul, Heartaches By The Number is an outstanding set of jukebox favorites, recorded by the premier musicians of the Stax/Volt and Hi Records studios in Memphis.

The Bo-Keys—named in tribute to legendary bands Mar-Keys and the Bar-Kays—formed in 1998, under the direction of bassist/producer Scott Boman, owner of Electraphonic Recording. In 2004 they released "The Royal Sessions" followed by "Got To Get Back" in 2011. A series of individual sessions, "The Electraphonic Singles" came out in 2014. Thanks to Boman, they have been active on the television and movie soundtrack circuit, and backed up several artists in outside projects. This record adds to their celebrated catalog, and takes them outside of Memphis to explore the sounds of Nashville and Muscle Shoals.

The title track has been popular since 1959, covered by a string of country artists, but the Bo-Keys give it a distinct R&B feel, enhanced by the voice of Don Bryant. Bryant was a singer at Hi Studios, also known for writing numerous hits for Stax. His voice is still in top form and it's special that he was selected for this interpretation. The Bo-Keys lead vocalist is Percy Wiggins, who handles the microphone like the seasoned pro he is. Wiggins has been recording since the 1960's, and is a valuable asset to their sound. He goes back to his early roots on "Don't Take Her (She's All I've Got) borrowed from the great Gary "U.S." Bonds

"I'm So Lonesome I Could Cry," by the memorable Hank Williams, was redone as a soul ballad by Al Green on his 1973 album "Call Me," and the Bo-Keys version adheres to that attitude, with original Green drummer Howard Grimes making a reprise. Two more country classics are rejuvenated for this occasion, Merle Haggard's "The Longer You Wait," and "Wasted Days and Wasted Nights," by Freddy Fender. These undergo a soul transfusion, and are brought back to life with a new guise. Adapted from the immense Bob Dylan songbook, "I Threw It All Away," is reworked as a glorious hymn, complete with gospel organ.

Several of the band chipped in to write "Learned My Lesson In Love," and Bomar added his "I Hope You Find What You're Looking For," exhibiting strong mariachi origins, featuring characteristic horns and guitars found on border radio stations playlists. The closing number, and only instrumental, is an unusual choice. The Nashville standard, "Last Date," was a huge hit for Floyd Cramer in 1960, popularizing his 'slip note' piano technique. The Bo-Keys wisely steer away from the original instrumentation, and let guitarist Joe Restivo play the familiar melody, following a different direction, which works for them.

Ray Charles long ago ran the traffic light at the intersection of country and soul. Booker T & the MG's created "the Memphis Sound," which was the foundation for the music heard here. The Bo-Keys are not doing anything new, they are playing what they know. This is a heart and soul celebration of traditional southern soul music, performed by the players who do it best.

Heartaches By The Number; Set Me Free; I’m So Lonesome I Could Cry; The Longer You Wait; I Threw It All Away; Learned My Lesson In Love; Don’t Take Her (She’s All I Got); I Hope You Find What You’re Looking For; Wasted Days And Wasted Nights; Last Date.