By JERRY D'SOUZA
December 1, 2007
Sign in to view read count 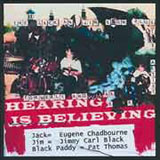 One never knows with Eugene Chadbourne. The multi-faceted entertainer is a mine full of surprises. He plays the banjo, the guitar and the electric rake, besides singing and composing. He has worked with musicians whose styles are diverse, yet he makes a compact fit. How many could lay claim to being one in spirit and song with John Zorn, Jello Biafra, Han Bennink, Bela Fleck and the Sun City Girls, to name just a few?

Among his many innovative collaborations is the one with Jimmy Carl Black (drums, vocals). Black had played with Frank Zappa's Mothers of Invention, but he also had the blues in him, as well as a nice sense for pop that put him in with Flo and Eddie. Chadbourne and Black began touring in 1991 as The Jack & Jimmy Show, with over 100 concerts in Europe, and they recorded several albums over the years.

Their newest adventure, Hearing Is Believing, was made in the studio with Pat Thomas (Fender Rhodes electric piano, keyboards, organ, cheap electronics) and the single-named Schroeder (percussion, drums, vibraphone, electronics, recording). Chadbourne and his cohorts not only blend different genres, they also meld them into one flowing body with a high degree of appeal.

The selections are wide ranging. Country mates with heavy metal, jazz finds a bedfellow in rhythm 'n' blues. The Beatles, Marvin Gaye, Charles Mingus, Dizzy Gillespie and George Jones are all taken to the edge and reinvented. Oh yes—Dick Cheney is in there too, and what could be better than discovering that "Cheney's Hunting Ducks. The song takes aim directly at the hound of war, juxtaposing his hunting with the death of soldiers. The lyrics are acerbic and laced with sarcasm, but they are truthful.

Logic, and the lack of it, has different sides. "The Girl from Al-Qaeda, which is wrapped in the melody of "The Girl from Ipanema, is a take on a suicide bomber fueled by heavy metal and distortion. Hope, however, springs up on "What's Going On, which comes on next. The power of the words still surge and impact; but The Jack & Jimmy Show being what it is, with their sly sense of fun, there is a particular niche for Marvin Gaye's father and his gun.

Black and Pat Thomas swing into "Pithecanthropus Erectus. The pulse is lithe until Black decides to lay down a harder beat. And well he should, for Chadbourne zaps some thick notes on the electric guitar that wallow in heavy metal. The country tune "When the Grass Grows Over Me' retains its inherent sensitivity, with the beat decidedly in that territory. Chadbourne sings and Thomas plays the piano and adds some marvellously integrated scratching courtesy of his cheap electronics.

It's an enthralling CD with some inspired lunacy and more than a hint of genius.

About The Jack & Jim Show