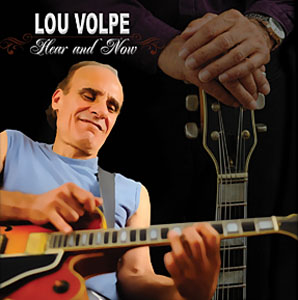 Lou Volpe is a seasoned session and touring guitarist who has backed a litany of music luminaries. On Hear And Now, he steps out into the spotlight and fills center stage with his melodic, infection playing. Backed by a superb cast of musicians, Volpe's playing straddles the line between classic jazz guitar and a more exuberant, blues-rock style. The beauty of Volpe's work is how he moves effortlessly between the two without tipping his hand. Where Volpe goes, the ear follows.

No song better typifies this ability than "Coltrane of Thought," with its blues-rock refrain seamlessly transitioning into the bursting flares of Volpe's John Coltrane-like solo. This is a guitarist who drives the music just as much as he lets it drive him, which creates a wonderful sense of the unexpected on each track. Take "One of Wes," whose musical tension comes from the energy of Volpe's expressive solo against the backdrop of a laidback rhythmic feel. Volpe follows a long improv line with flawlessly placed ending hooks, just as the beat is about to turn, adding an expectant overtone to feel.

One worry with longtime session musicians fronting albums is that the ingrained habit of being a support player will silence their own creative voice. Volpe largely avoids this pitfall. "Prince Charming" is heavily reminiscent of a Herb Ellis blues,but Volpe throws in so many melodic ingredients that the song takes off from the inspiration instead of sinking beneath it. Especially interesting on this track is the contrast between Volpe's dirty-boogie sound and pianist Onaje Allan Gumbs' bright, upbeat take. Blending together, the two create a wide harmonic tone that catches the attention as the two trade solos.

Volpe may have a long career of supporting others, but Hear And Now proves he's willing and able to stand alone as a front line jazz musician. With a grounded and versatile band underscoring his plethora of ideas and insights, Volpe lets loose and the result is a contagious energy wrapped within a knowing musical ability.

Astral Island; Hear and Now; Prince Charming; Coltrane of Thought; One for Wes; Live Wires; Blue Boppa; Softly As in a Morning Sunrise; If You Should Leave; Love Dance.