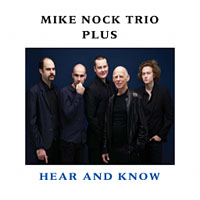 It's an admirable objective to push the musical envelope, but it's unrealistic to expect artists of longevity to make each and every record a major milestone. What goes a longer way for those with careers measured in decades is consistency. New Zealand-born/Australia-based pianist Mike Nock has a handful of particularly memorable recordings including In Out and Around (Timeless, 1978) and, more recently, Mike Nock's BigSmallBand Live (ABC Jazz, 2004) and Meeting of the Waters (Jazzahead, 2007), but there's nary a misstep amongst the twenty or so recordings he has led/co-led, and the even more sizable discography on which he's participated as a band member.

Hear and Know reunites Nock's trio from An Accumulation of Subtleties (FWM, 2010), capitalizing on the same chemistry that has been evolving since Nock first met the Waples brothers a decade earlier at the Sydney Conservatorium. Expanded to include a saxophone/trumpet frontline, Hear and Know is an even stronger set, featuring some of the pianist's best writing, with all but one track making a first appearance here.

If "The Syblline Fragrance"—originally from Nock's criminally out-of-print solo piano set, Touch (Birdland, 2004)—sounds even more familiar, it's because one of its cornerstones is the same unmistakable 5/4 vamp at the heart of In Out and Around's "Shadows of Forgotten Love," here subsumed into a larger compositional framework that gives both Nock and trumpeter Ken Allars room to move—Allars is especially noteworthy in a song whose delicate pulse and melody-rich solos feel of a kind with Polish trumpeter Tomasz Stanko's Soul of Things (ECM, 2002) quartet.

If "Sibylline" recalls Stańko's more impressionistic bent, the deceptive simplicity and spare melancholy of the title track's opening minutes occupy similar territory as Norwegian saxophonist Trygve Seim's "Sorrow," from Different Rivers (ECM, 2001), with Nock, Allars and saxophonist Karl Laskowski layering its long, languid theme together. But the similarities end there, not just because the tune allows for a lengthy solo from bassist Ben Waples that Seim would not, but because of the more buoyant rhythm and in-tandem soloing by Allars and Laskowski that ultimately push the song towards a more joyous conclusion.

If this implies that Hear and Know lacks either energy or a more direct link to the jazz tradition, the fiery "Colours" puts such suggestions to rest. It swings, but in a free-bop kind of way, and features one of Nock's best solos of the set, combining concise motivic development with a quirky edge and extreme interplay with Laskowski that opens up even further when Allars dives into the pool, and is as exciting as this record gets.

If each song possesses its own footprint—from the simmering "After Satie" and "Slow News Day" to the expansive and irregularly metered "If Truth Be Known"—the unifying thread of Hear and Know's fine group is Nock. Turning 72 this year, he's as vibrant and capable as ever, delivering a set that—between his writing and the performances across the board by his largely youthful quintet—approaches In Out and Around as one of the best recordings of Nock's career.