The Crusaders: Healing The Wounds 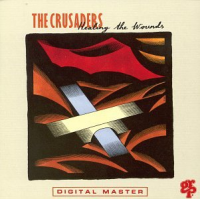 Definitely, this is one of my favorite albums from the 1990s. I'm not even that big of a Crusaders fan (though I love Joe Sample's work). There is a tremendous groove element here along with some great melodies and, of course, some fine solos from Sample (especially) and saxophonist Wilton Felder. In fact, the album starts strong from the gate with the track Pessimisticism. There's a deep pocket here and Sample, as always skips along the top in his swinging eighths style with his solo, while Felder plays off of the groove during his solo. We should expect no less than an outstanding package overall- the album is produced by "Maestro" Marcus Miller.

As is central to Miller's efforts as producer, arrangements are strong, chord voicings are choice, and instrumentation is key. This is a full, fat mix. Likewise, there is strong personnel on this release. Miller plays bass on this outing (of course!) as well as providing some synth programming. He is aided with holding down the groove (as if it were necessary) by William "Bubba" Bryant on drums and Lenny Castro on percussion. We also get some great rhythm guitar work, which serves to outline and propel the grooves, by Michael Landau. Steve Lukather guests for a solo on the Stevie Wonder original Cause We've Ended As Lovers , and Jason Miles offers some support in the synth programming department.

There's a misleading sense of simplicity on the tracks. Take Mercy, Mercy, Mercy , the Joe Zawinul tune for example. This is a very straightforward tune. The groove is key. If the groove doesn't happen the tune doesn't work. They approach on this track is so subtle, yet if you listen closely you hear layers upon layers of rhythmic support- keys, guitar, and some dynamite percussion work. These elements make the track work. Moreso, these elements together make the track a stellar cover. Everyone's material should sound as good when covered by another artist!

This is definitely an album for studying from a production standpoint. It's solid all around. The third track Little Things Mean A lot is much like your standard Sample fair. It starts with a strong groove which emphasizes the melody and bridge and falls into a latin swing behind the solos. In fact, Sample provides a quite impressive, solid jazz solo on acoustic piano. The bridge layers both a synth melody and a soprano (and tenor doubled) counter melody in such a way that you don't really notice they’re separate.

Jeff Beck fans may not appreciate the turn on Wonder's Cause We've Endcd As Lovers , but it's every bit as strong as the original, even sweeter, more dramatic. The pocket is slammin' and the guitar work is to sink your teeth into. Shake Dance (a Marcus Miller tune) is a bit more programmed that other tracks and a bit more syncopated as well, but I also think it was one of the more popular tracks from this album for NAC radio. The Miller penned track Maputo follows (yes, this is the same tune done by Bob James and David Sanborn- Miller was involved with that album too) with a tidy little acoustic piano intro by Sample. In contrast with other versions it has acoustic piano support the melody and some interesting percussion work in the background. Healing the Wounds is a Sample tune and is a precious as they generally are. The delicate melody, played expressively by Felder, sits atop the backbeat before falling into a pseudo-samba bridge which also serves as the outro (with a synth-pennywhistle solo).

Last on the disc is one of my favorite tracks, Running Man. It has the futuristic feel of the Arnold S. movie and is probably the funkiest groove on the disc. It's probably my favorite because it features some tasty electric guitar and Sample's swinging acoustic piano work. Felder's no slouch on this track and it really cooks. I think they had fun recording this one. You don't always have that sense. There's also a little less production here- a little more group feel.

Absent from this release are compositions from Felder. His playing is plenty strong, though, and a saxophonist could learn much about how to groove from listening to Felder's work here. This is the kind of release that made GRP so successful in the 80's, and we haven't seen enough of in the 90's. I'll give this one at least 8.5 Jazbo's.