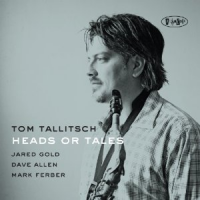 Tenor saxophonist Tom Tallitsch makes his Posi-Tone debut with Heads Or Tales, a welcome addition to that label's impressively strong roster of straight-ahead and swinging musicians. Tallitsch has a warm tone, a lyrical and flowing style and an ability to craft solos that add to the narrative of his compositions: qualities that make the tunes—all but one his own compositions—immediately accessible, yet capable of rewarding repeated listening with fresh revelations.

While Heads And Tales is his label debut, it's actually the Cleveland-born, New York-based saxophonist's fourth album since the self-produced Duality (2005). It's the sound of an experienced and confident player; his tenor saxophone sound is stamped across the album, either crafting melodies or delivering finely-judged solos, but he never attempts to overwhelm his band mates, never outstays his welcome and never stretches a tune too far. There are plenty of other players who could learn from Tallitsch's economy of composition and interpretation.

Gold can almost be described as Posi-Tone's house organist, with numerous appearances on the label as leader or sideman. He is a consistently fine player, with a great sense of dynamics and a swinging, rhythmical, style. He forms an excellent partnership with drummer Mark Ferber, sharing a tough, driving, approach to the music that helps to build its power and excitement. Gold also contributes an imaginative array of tones, and some telling individual contributions such as his intense, tight solo on "Tenderfoot."

Tallitsch closes with an unusual choice of cover tunes, Neil Young's classic, "Don't Let It Bring You Down." Tallitsch plays it straight—his version just 20 seconds longer than Young's original on After The Goldrush (Reprise, 1970)—but ensures that his saxophone sound retains the mood of Young's lyric. It's just one facet of Tallitsch's abilities, as Heads Or Tales makes abundantly and enjoyably clear.