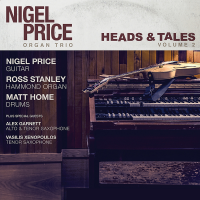 Nigel Price's second volume of Heads & Tales is, quite literally, a game of two halves. As with the first volume, released in 2011, it incorporates two CDs each containing different versions of standards. The first disc, where Price is accompanied by Matt Home on drums and Ross Stanley on Hammond organ, plus guest saxophonists Alex Garnett and Vasilis Xenopoulos, utilises the same device as on the first volume. The standards are given new heads and titles but follow the same or similar underlying structures as the originals. The second disc comprises more faithful interpretations of the standards but here Price plays solo guitar, mostly accompanied by double tracked guitar ("Come Rain Or Come Shine" is a single guitar solo exception).

This straight ahead, hard bop influenced set belies Price's history as a member of both the acid jazz James Taylor Quartet and the funky jazz band known collectively as The Filthy Six. But Price, influenced by the likes of Wes Montgomery and George Benson is unquestionably a terrific jazz guitarist as this album attests.

The main point of the album and its predecessor is the way in which a standard can be played with a different melody and then separately given a more conventional treatment too, so it really does become a two-for-one album. Price also rechristens titles with typical dry humour so Gigi Gryce's "Minority" becomes "Majority," Harold Arlen's "Come Rain Or Come Shine" becomes "Wet & Dry" and Frank Loesser's "Slow Boat to China" is transmuted into "Junk" (a Chinese boat!)

On the first disc (Heads) the unrestrained ebullience of the opener "Blue Genes" (a version of Duke Pearson's "Jeannine") is immediately apparent and fixes in the memory like glue. But Price's talent also extends to consummate blues playing too as evidenced on the sultry "Smokescape" (a version of Kenny Burrell's "Midnight Blue") and the breezier "Fragment Of Blues." The only anomaly on the album is Jimmy Raney's "Parker 51" which remains in its original arrangement.

On the solo disc (Tales), the numbers are performed with crystalline precision and sensitivity. Take for example, Horace Silver's "Peace," where Price comes close to emulating such great jazz guitarists as Joe Pass and Tal Farlow, or Ray Noble's "Cherokee," on which Raney's "Parker 51" was based.

One interesting aspect of Price's playing is his unadulterated guitar tone (for guitarists, he's playing a D'Angelico NYL-5) which utilises no effects pedals, (in an excellent 2012 interview for the Huffington Post, Price referred to these as "talent boosters"). Indeed the tone and to some extent the style Price obtains on "Up And Out" is not unlike that found on John McLaughlin's 1969 debut album Extrapolation, but Price still retains his own characteristically pure and punchy style. In truth it's fair to say that Nigel Price is probably the most dynamic and gifted guitarist on the British jazz scene today and this is the proof.