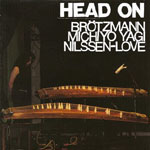 A collaboration between the loud saxophones of German legend Peter Brotzmann, Japanese koto master Michiyo Yagi and great Norwegian drummer Paal Nilssen-Love may not sound an obvious to those who still consider the ancient stringed koto to be an exotic instrument. The short YouTube clip of Yagi playing with this trio at the 2006 Kongsberg Jazz Festival proves it a natural grouping. This trio has been working steadily for the last three years, touring Japan and Europe.

Yagi has a tendency to collaborate with adventurous and resolute musicians. She recorded the beautiful Live! at SuperDeluxe (Idiolect/Bomba, 2006) with Nilssen-Love and bassist Ingebrigt Haker Flaten and has collaborated regularly with many other forward-thinking Norwegian musicians including saxophonist Hakon Kornstad, drummer Thomas Stronen, guitarist Eivind Aarset and power-jazz trio MZN3. Brotzmann and Nilssen-Love have collaborated frequently and in many formats in recent years—duo, trio with Swedish saxophonist Mats Gustafsson and in Brotzmann's Tentet. This limited edition disc was recorded live at the Manufaktur club in Schorondorf, Germany and was mixed and mastered by Sonic Youth's Jim O'Rourke.

The opening track, "Red Kites," begins with all three testing their instruments' palette of sounds. Brotzmann starts in a relaxed and soulful mode with Yagi and Nilssen-Love in imaginative percussive interplay. Brotzmann then begins to push both forward and louder, soaring to the stratosphere while Yagi and Nilssen-Love anchor the saxophonist's manic blows with broader freeform textures. Yagi uses two kotos as an extended bass instrument and Nilssen-Love adds sensitive colors; surprisingly, it then morphs into spare and gentle interplay, evolving slowly into a collective aggressive assault. Brotzmann plays in his typical unstoppable manner, Yagi pushing and hitting the koto strings with a stick while Nilssen-Love's muscular drumming cements this interplay with a rhythmic pattern.

"Head On" is a series of duets. It begins with a fast interplay between Brotzmann's long Aylerian blows and Nilssen-Love's inventive polyrhythmic drumming. When Yagi joins with a punkish-folkloric sound, both bowing and strumming the koto's strings, Nilssen-Love answers with his own arsenal of strange metallic sounds. Brotzmann begins his duet with Yagi using careful, high multiphonics; moving to deep bluesy blows, all three continue with a free interplay that manages to sound both bluesy and traditionally Japanese simultaneously. Nilssen-Love opens the closing track, "The Man In The Raincoat," with a resourceful and open-ended rhythmic texture that triggers Yagi for a dense but gentle exploration of the koto strings' sonorities. When Brotzmann joins midway he adds a sense of structure to the fascinating and inventive interplay, his welcome and uncompromising blowing navigating this improvisation to its coda.

Leaving the listener exhausted, the head-on sonic collision of these titanic improvisers is guaranteed to have fans of this kind of extreme free play begging for more.

Red kites, Head On; The Man In The Raincoat.