By ROGER FARBEY
February 20, 2019
Sign in to view read count 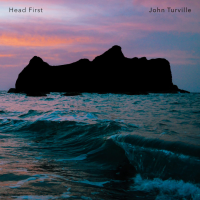 Head First is British pianist John Turville's first album in a quintet format. His previous albums Midas (2010) and Conception (2012), both on the F-IRE label, were trio dates and, on his most recent album Red Skies (Splash Point Digital, 2013), he duetted with vocalist Brigitte Beraha. He has also been a member of the Solstice sextet whose album Alimentation (Two Rivers, 2016), featuring Beraha and saxophonist Tori Freestone, was received with critical acclaim.

The set opens with "Fall Out," utilising the horns to create a warm and vibrant ensemble setting. "Almagro Nights," a piano trio number, allows Turville the space to stretch-out whilst closely underpinned by Dave Whitford's resonant bass and James Maddren's razor-sharp drumming. One of Turville's mentors was the late John Taylor, so it was fitting that at 2015's Jazz Piano Summit at London's Purcell Room, Turville was one of nine featured pianists. The composition he wrote for the occasion was "A Perfect Foil" which was later recorded for this CD (also dedicated to Taylor), and in addition to Turville's expressive piano, one of Taylor's long-time collaborators, Julian Argüelles, offers some exquisitely serpentine soprano saxophone. The turbulent angularity of "Seahorses" contrasts sharply with the pastoral "Interval Music," the title of which belies its true elegance and depth.

The mood changes with the title track, a breezy samba, whilst "Ennerdale," introduced by the horns, invites a reflective interlude. Continuing in this mode, "Diego Schissi's "Cancion 4" is reminiscent of another of Turville's heroes, the late Kenny Wheeler, with Robbie Robson channelling Wheeler's often melancholic style. "A Month In Tunisia" initially offers the antithesis of Dizzy Gillespie's "A Night In Tunisia." Beginning in a languid, meandering fashion, it gradually accelerates whilst Argüelles delivers a robust tenor solo on his self-penned composition. Michel Petrucciani's "Beautiful But Why" from Cold Blues (Owl, 1985), replete with its charming, memorable melody, provides a fittingly upbeat conclusion to this set. Recorded at Artesuono Studio in Udine, Italy on 11th and 12th April 2017, this quintet format has successfully afforded Turville the opportunity to broaden his horizons and execute an album of intelligence and finesse.