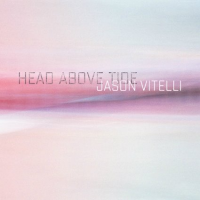 New York-based artist Jason Vitelli should be highly commended for his efforts at blending songwriting with interesting musical forms and arrangements (think Steely Dan), a sound that is too often avoided. Rooted in his experience as a composer for film, Vitelli's music often has a theatrical sound. His baritone voice set against the sparse production recalls a musical theater production on more than one occasion.

His third full-length release, Head Above Tide, explores many styles. From reggae to smooth jazz to prog-rock to avant-garde, most genres find representation here. Although there is not much variation of tempo, there are times when the band settles into a groove and their playing stands out, notably on tracks such as "Trees" and "Autumn Hymn"

Lyrically, Vitelli is a talented storyteller. The songs explore themes of humility from many angles, and the lack of a clear verse/chorus structure is refreshing and carries them forward. They are also intellectually challenging, drawing inspiration from and referencing literature, such as William Styron's novel Sophie's Choice, or political events, such as child refugees of civil war in Sudan.

Altogether, the album has many interesting ideas, but lacks the musical identity that most great records have. The wide variation in styles but minimal change in tempo or dynamics create an end-product that sounds more like an extended demo than a cohesive work. This does not detract from Vitelli's song-writing, lyrical talent or his passionate performances, which are more than worth a listen. Fans of Elvis Costello or Kurt Elling may find the album very interesting.