By HRAYR ATTARIAN
June 9, 2013
Sign in to view read count 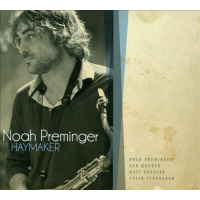 Tenor saxophone phenomenon Noah Preminger's third release as a leader Haymaker is a uniformly engaging album with a strong poetic sense. The ten uncluttered compositions serve primarily as vehicles for Preminger's intelligent expressions of creative spontaneity as well as those of his highly sympathetic band-mates.

On the title track Preminger's melodic and angular monologue evolves like free verse with intriguing flexibility of cadence while maintaining a mellifluous lilt. Together with guitarist Ben Monder's sparse and chiming notes and drummer Colin Stranahan's rumbling beats he builds an atmospheric, three way conversation that is nevertheless intellectually stimulating.

This balance of haunting ambience and erudite substance is one of the hallmarks of the disc. The cinematic "15,000" is a darkly hued visceral piece that features Preminger's acerbic, undulating saxophone and Monder's slowly simmering solo both replete with gripping and clever twists and turns. Stranhan's subtle chromatic explorations and bassist Matt Pavolka's lyrical, surging strings add to the mystical aura.

A democratic leader, Preminger allows ample room for his side musicians to share in the spotlight. Pavloka spices up his intricate and elegiac improvisation with Spanish hints on the wistfully romantic "Stir My Soul." Equally melancholic "Morgantown" features Stranahan's edgy and percolating drums that add a primal urgency to the otherwise mellow and meandering tune.

Monder's strings vary in sonic timbre from the dark and hypnotic thrill on the baroque influenced "Rhonda's Suite" to the gorgeously emotive tone on the modal "Animal Planet." On the cover of Dave Matthews' "Don't Drink The Water" he channels an inner rocker with the swells of blistering chords. The song is full of impressionism as cymbals and drums rustle in the throaty and resonant saxophone's wind. Preminger's ethereal tenor wails in somber skirls sounding like an otherworldly bagpipe.

Over a span of three records Preminger has developed a warm and unique voice and a singular style. Haymaker is mainstream enough to delight casual listeners yet has plenty of innovation to satisfy hardcore jazz fans.