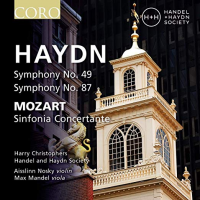 A curious gathering of potent spirits has been brewing over the last decade in Boston, Massachusetts. First, in 2008, Harry Christophers replaced Grant Llewellyn as (who, in turn, had replaced Sir Christopher Hogwood) artistic director of the Handle and Haydn Society, who in 2015, celebrated its bicentennial. Christophers is noted for being the founder and conductor of the British choir and period-instrument ensemble The Sixteen, with whom he inaugurated the CORO Record label. Second, violinist Aisslin Nosky was named Concertmaster of The H&H Society in 2011. Nosky is also a member for the noted ensembles I FURIOSI Baroque Ensemble, the Eybler Quartet, and Canada's Tafelmusik Baroque Orchestra. So, what was already a storied American Institution, became even more so.

Christophers has allowed no dust to settle on him since coming to the H&H Society, releasing a flurry of recordings over the past decade. Within these releases are some series, one of which is the orchestra's Mozart and Haydn series of which the present Haydn: Symphony No. 39, Symphony No. 87, Mozart—Sinfonia Concertante is the second volume following 2018's Haydn: Symphony No. 26, Symphony No. 86, Mozart—Violin Concerto No. 3 (Coro). Whether this series is heading toward some measured discographic completion remains to be seen and, I suppose, is beside the point.

The programming of these discs highlights the ensemble together on the symphonies and then Nosky specifically, and violist Max Mandel, on the Sinfonia Concertante, providing a tidy thematic thread. Immediately with release of the present disc it is apparent that it mirrors the first volume in the series with its outstanding ambiance and sonics. The performances on these two releases may be described as "clinically-precise," but this description need not indicate a sterile and lifeless performances, rather spirit-infused music soften and warmed by the performance experience. This program was recorded live at Symphony Hall, Boston, Massachusetts on 26 & 28 January 2018, whose chamber provides a grand acoustic space for performance.

The choice of repertoire is interesting in that it involves a symphony from the composer's Sturm und Drang period (Symphony No. 49) and the last of what have become known as his "Paris" symphonies (Symphony No. 87). The two pieces offer great contrast between color and temperament, the former being more dramatic and the latter lyrical. Mozart's Sinfonia Concertante falls chronologically outside the neighborhood of the composer's violin concertos, standing alone. Nosky and Mandel share a dense empathy that adds a certain magic to their performance. Taken as a whole, this release is an able follow up to the first volume and stands as a potent affirmative to the question, "Do we really need recordings of Haydn Symphonies or Mozart violin pieces?"