By JAKOB BAEKGAARD
January 23, 2014
Sign in to view read count 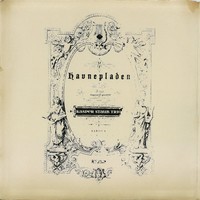 There is no doubt that nowadays there is an increased focus on ecology and recycling, but Danish pianist Kasper Staub has gone the extra mile with his record Havnepladen (the harbor record). The album is pressed in 100 copies and each album has a sleeve that has been recycled from another record. Every cover was dampened, reversed and glued together again and printed with a serigraph, thus making each record a unique handmade work of art.

As fascinating as the story of the artwork is, the music carries its own weight. Staub is a composer influenced by many sources, including the folk-lyricism of Swedish jazz-pianist Jan Johansson, the fugues of Johann Sebastian Bach and the melancholy harmonies of Radiohead, but Havnepladen finds him and his trio with bassist Jens Mikkel and drummer Anders Vestergaard moving in a new direction.

As opposed to his short and through-composed works in the past, tracks like "Nybegynder" and "Ritual" explore different aspects of improvisation. The former is a slowly unfolding sound painting, with the pulse stated by Jens Mikkel, gently plucking the strings, leaving lots of space between the notes, while Staub plays dark chords and uses the strings on his instrument to create a muffled, dissonant ambience. The latter, on the other hand, is wild and swinging and finds the pianist tipping his hat to Thelonious Monk, punching the chords like a dancing boxer.

At heart of it all, however, is a singing lyricism and Staub's greatest strength is still his ability to craft airy and memorable melodies. Together with his trio, he is able to move in any possible direction. Havnepladen isn't a safe call, but a bold statement from a trio that has already found its own sound and has begun to test its own musical boundaries.