By JACK BOWERS
December 4, 2016
Sign in to view read count 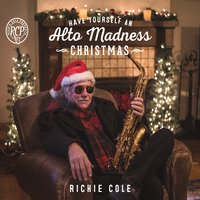 On Cole's superb new seasonal album, Have Yourself an Alto Madness Christmas, the warmth and happiness fairly burst from the leader's horn on such holiday favorites as "Let It Snow," "Sleigh Ride," "White Christmas" and "I Saw Mommy Kissing Santa Claus," while the sincerity is palpable on "The Christmas Song," "O Christmas Tree" and "I'll Be Home for Christmas." There's ample room for playfulness as well, most notably on Cole's own compositions, "Bad Santa" and the irrepressible bossa "Mr. Grinch B. Bopsky" (a.k.a. "I've Grown Accustomed to Her Face"). Cole also wrote the charming—and most unusual—"Christmas in New England." His zealous rhythm section (Mark Lucas, guitar; Jeff Lashway, piano; Jeff Grubbs, bass; Reid Hoyson, drums) is amplified on three numbers by tenor saxophonist Mike Tomaro, trombonist Jeff Silverbush and trumpeter James Moore, and on three more by tenor Rick Matt, trombonist Reggie Watkins and trumpeter J.D. Chaisson.

Cole raises the curtain with Vince Guaraldi's Charlie Brown classic, "Christmas Time Is Here," which precedes Sammy Cahn / Jule Styne's light-hearted "Let It Snow," the venerable "O Christmas Tree" and the Bing Crosby hit from 1943, "I'll Be Home for Christmas." Later, there's room to rock 'n roll on the Elvis Presley favorite, "Blue Christmas," as well as on "Jingle Bell Rock." "Silver Bells" has been a holiday staple since it was introduced by Bob Hope and Marilyn Maxwell in the film The Lemon Drop Kid, while "Alto Madness Christmas" is the same "Merry Little Christmas" sung by Judy Garland in the Hollywood masterpiece, Meet Me in St. Louis (and reprised here by the Fabulous Altones: Carey Evans, Ian Kane and Reni Monteverde).

While his guests add color and variety on half a dozen selections, Cole reserves most of the solo space for his expressive alto—and that is by no means ill-advised. Even though he is now looking in the rear view mirror to see sixty, Cole remains at the top of his game; the technique is solid, the phrasing precise, the wellspring of ideas as plenteous as ever. Best of all, he is clearly having a wonderful time, as will those who reserve space for an Alto Madness Christmas on their holiday shopping list.

Title: Have Yourself an Alto Madness Christmas | Year Released: 2016 | Record Label: Self Produced