Richie Cole: Have Yourself An Alto Madness Christmas

By ROB ROSENBLUM
January 21, 2017
Sign in to view read count 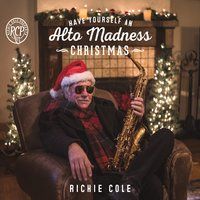 Christmas music is a sort of sub genre of American pop, mostly maudlin and uninspiring in its lyrics, harmony and melody. Yet, it is a perennial magnet for jazz artists.

On the other end of the spectrum is Richie Cole, a brash altoist and sort of a merry prankster bebop artist. Fans and critics alike have delighted in his ability to take the complex structures of the music of Charlie Parker and Dizzy Gillespie and mold them into foot stomping, joyful, in-your-face eruptions.

Have Yourself An Alto Madness Christmas pits the burning hot Cole with the nearly impenetrably stodgy and sentimental pablum of yule time melodies. Cole wins in a close contest.

Vince Guaraldi's "Christmas Time Is Here" is the opener, with a Tonight Show band feel and a pungent and fun loving alto by Cole followed by a perfunctory piano solo by Jeff Lashway, and a well crafted, occasionally bluesy guitar solo by Mark Lucas Band.

"Let It Snow" gets off well with a crisp opening statement by Cole at a medium up tempo at which he excels. Lashway and Lucas return with thoughtful statements. Somehow, Cole makes this sound like a jazz tune.

"Oh Tannenbaum" is symptomatic of the genre -a flat melody and little harmonic inspiration. Bassist Jeff Grubbs hangs close to the theme, guitarist Lucas manages to find some bluesy possibilities. Cole does what he can to revive the song—mostly by almost ignoring the spirit of the piece, with a fiery exposition.

"I'll Be Home For Christmas" is a ballad, and one worthy of Cole's playground. It captures the more plaintive side of his personality after a warm intro by Lashway. You hear Cole's tart tone displayed in full along with his trademark staccato eighth notes. Before it ends, we are treated to a nicely constructed, gentle exposition by Lashway.

"Mr. Grinch B. Bopsky" is a Cole composition and has a kind of show tune feel to it, before the altoist launches into one of his best solos of the set -long, relentless double time bebop lines with a hint of Coltrane, and a humorous ending. There is nothing Christmassy here.

"I Saw Mommy Kissing Santa Claus" is irretrievable from it's department store back ground muzak legacy.

"Christmas In New England" is yet another tune penned by Cole, who has often indicated that he identifies himself more as a composer than player. It has a nice, yearning quality, played in 3/4 time. Cole plays a good, solid solo with no Yule references. This is a jazz tune that happens to be on a Christmas CD.

"Jingle Bell Rock" is pure corn, although Cole throws as much passion as one could expect given the circumstances.

Irving Berlin's "White Christmas" has long been subject to interpretation by jazz musicians. But whereas Charlie Parker turned it into a romp, Cole tries to pay it a little more respect, with a tempo more in keeping with the dream. None of the solos wander far from the theme.

"Blue Christmas" is 50's rock and best left behind in the 1950's with Father Knows Best and beach party movies.

The title tune is a feature for a vocal group, which is essentially the tired old standard, redressed with the words alto madness Christmas substituted for merry Christmas. That Cole manages a spirited solo on this dreadful tune is quite a feat. Hearing Cole's laughing, gravelly voice near the end is a nice touch.

"Song For Christmas" is well arranged for the band, and proceeds in a sprightly 3/4 tempo, but while the solos are well played they are fairly routine.

Even Cole can't wrestle "Silver Bells" to the ground. It does little aside from conjuring up visions of Macy's and desperate shoppers. "Sleigh Ride" will make your non jazz friends happy, played as straight as your bow tied uncle.

"Christmas Song" is an a Capella piece by Cole and a touching ending to this missive. No improvising -he just let's his tender treatment and the melody speak for itself.

In the liner notes, Cole says that he wants to conjure up the holiday memories and feelings of his childhood. For many, that may mean special discounts on televisions and family fights over dinner. But hopefully it inspires thoughts of days gone by and warmth and laughter that are also part of "the season."

This third CD Cole has issued in 2016 is something to play during Christmas time, when your guests are relatives for whom jazz and Kenny G are synonymous, to break the boredom of the holiday music, without chasing your company out of the house. And, who knows—it may even open someone's eyes and ears to the real thing.