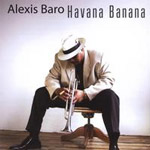 Over the years, Toronto has opened its arms to Cuban musicians. Among them is Alexis Baro, who came to the city in 2001. Baro has wide musical interests which include, quite naturally, traditional Cuban music and jazz. The latter derives much of its soul from his native land and the wider spectrum of Latin jazz.

Baro who wrote eight of these tunes, ropes in the past to add dimension. This bodes well on "Hasta Cunado, where the flighty Latin air wafts around the bop modes that fly from Jeff Bornes' tenor. Baro, who calls Dizzy Gillespie one of his influences, manifests Dizzy's approach in his playing, reaching out and hitting the high notes but keeping it all under control. He achieves an emotionally compact mood on "Like Spring's Drop, essaying the ballad with soulful and endearing power. His band is emphatically sublime; Jeff King keeps the embers aflame, his tenor moody yet passionate.

Baro pares it down to just himself and percussionist Joaquin Hidalgo, with Alberto Alberto and Jose "Papo Gonzales on vocals, for the sprightly "Tan Lejos. The singers are hoarse, but that seems to be the intent, as they fit in so well and add to the delight. Expectedly, "Footprints is given a Latin treatment, treading in softly on congas that get more pronounced and vibrant before they swirl around and get Baro to investigate. He splits the melody open, carves out some high notes, and even blitzes some fast ones. But even in the eye of the storm, he ferments some good ideas, leaving the leavening to Bornes and to Luis Guerra, whose turn on the piano cascades with percussive ebullience to lighten the mood and bring in a nice balance.

Footprints; Hasta Cuando; Nothing But Human Nature; Like Spring