By MARK CORROTO
June 17, 2010
Sign in to view read count
Begun in 1975, Hat Hut Records was to become the model for adventurous, independent, new music labels such as Okka Disk, AUM Fidelity and Clean Feed. From the start, founder Werner X. Uehlinger sought out challenging and innovative musicians and music that might have been too risky for major labels to produce. This very small Swiss label sustained musicians such as reed players Joe McPhee and Anthony Braxton and pianists Matthew Shipp, Misha Mengelberg and Horace Tapscott. In 2010, Uehlinger's imprints include HatHut, hatMUSICS, hatART, hatOLOGY, hat(now)ART for contemporary composition, and hatNOIR for non-categorizable sounds.

For 35 years, adventurous music listeners have sought out the unique sleeves and the exotic sounds they contain. The label presented keyboard player and space traveller Sun Ra, pianist Cecil Taylor and saxophonist Steve Lacy as the jazz legends they would eventually be recognized as today. And it also introduced major stars in the making such as reed players John Zorn and Ellery Eskelin and trumpeter Dave Douglas. Each new release was a portal to a new world.

With hatOLOGY's recent reissue series, the label is re-releasing many long out-of-print editions, remastered in 24-bit sound and presented with new liner notes. Each disc is an aide mémoire to great innovators of the recent past (or an excellent introduction to new listeners). 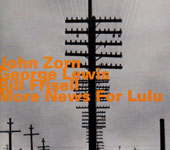 When the neo-cons were contriving the re-invention of jazz in the 1980s they learned how to reproduce the sound and look of bebop pioneered some 30 years earlier. Record buyers and jazz listeners could hear "Salt Peanuts" played almost exactly like trumpeter Dizzy Gillespie once sounded, played by a 20-something musician who might not have known that Gillespie was still alive! It can be argued that this mimicry nearly destroyed jazz, except there were innovative artists keeping the flame alive. Today, we know of three such musicians: John Zorn, trombonist George Lewis and guitarist Bill Frisell.

Back in the late 1980s they too were playing bebop, but the News For Lulu band—a piano-less, bass-less and drummer-less trio—could never be mistaken for a neo-con youngster project. Zorn, founder member of the New York Downtown scene and a restless musician with a preference for duck-calls and hardcore sound, took the music of the pianist Sonny Clark, saxophonist Hank Mobley, trumpeter Kenny Dorham and pianist Freddie Redd and revived it with the help of longtime AACM player Lewis and soon-to-be guitar god Frisell. The band produced the first volume of mostly studio music News For Lulu (1988), which was also reissued, then this album of 1989 live dates in Paris and Basel.

The trio adds one track by organist Big John Patton and one by Misha Mengelberg to the hard bop standards. These sessions are crisp renditions with more than a suggestion of the future of Zorn's music. Heard are the pops, trills and squawks that will become his signature sound. Here they are made in service to compositions by others. Frisell, a perfect accompanist, seems content to allow Zorn and Lewis to soar. The faithful renditions of these sometimes little known hard bop tunes are engaging and ultimately captivating. They sound as fresh today as they did more than 20 years ago.

This meeting of two innovative and eclectic outsider guitarists has long been an out-of-print treasure. Returned to the market, this duo set demands consideration of listeners and fans of both musicians.

Separated by a generation, Loren Mazzacane Connors (b. 1949) and Jim O'Rourke (b. 1969) show signs of being one mind on this thoroughly improvised live concert in Bern, Switzerland in 1997. The gentle manner of the music belied the intensities of the creators, putting forward a sound not unlike waves tenderly lapping at the shore.

O'Rourke is probably best known as a rock musician and the producer of Sonic Youth and Wilco. But he has also carved out a career with musicians such as reed player Mats Gustafsson, Faust and trumpeter/cornetist Rob Mazurek. Here he tailors his guitar playing to open spaces and to his partner's minimal guitar style. Neither player is of the mind to push the pace or divert from this Western Americana feel. The results are magnetic and mesmerizing.

In a perfect world, all piano trios would sound like the one on this ballad session. Marc Copland, the saxophonist turned pianist, accomplishes a nearly perfect recording along with bassist Drew Gress and drummer Jochen Rueckert. Recorded in New York in 2001, this is the third edition of this particular recording. If the market has any say in it, either the label should cut more discs or plan on several more editions.

The album is readily reminiscent of saxophonist John Coltrane's Ballads (Impulse!, 1962) or perhaps the John Coltrane And Johnny Hartman (Impulse!, 1963) sessions. Here not only are the themes luscious but the music is either taken from Coltrane, "Crescent," written for him, "Soul Eyes," or associated with him, "My Favorite Things" and "Greensleeves."

Copland dresses this recording with three solo versions of Rogers and Hammerstein's "My Favorite Things," opting not to extend the music out in Coltrane style, but to turn it inward, expressing it in a bitter sweet deceleration of playing. Likewise the trio's take on "Crescent," with a sly swing that skirts the obvious Coltrane references. This is music re-imagined as a beautiful dream. The title track, favored by so many jazz performers, capitalizes on this tight trio. Each player is reactive to and attuned to the others' playing, and all three negotiate a difficult composition with relative simplicity and accessibility. It is a triumph of a recording.

Are You Going To Stop...In Bern?

Tracks: Now Who Are These Guys?; Still Going...; Are The going To Stop?; You Can Stay If You Want, But I'm Going Home.