By DUNCAN HEINING
November 1, 2012
Sign in to view read count 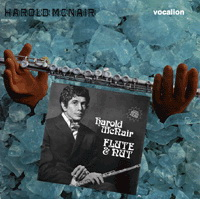 The story of Jamaican saxophonist/flautist Harold McNair is one of the great "what-might've-beens" of British jazz. He was, by all accounts, a charming, well-mannered guy with a beautiful sound on tenor, alto and, in particular, on flute, and the music just flowed through him. McNair did a lot of session work, toured with Donovan-that's him on the troubadour's In Concert (Pye) album from 1967 and on "There is a Mountain," and who played in drummer Ginger Baker's Airforce and C.C.S. As far as his own recordings go, these were few and far between. Two were released only in the Caribbean. Another, Affectionate Fink, was recorded for "fellow" Jamaican Chris Blackwell's Island label in 1965 and featured Alan Branscombe on piano and Ornette Coleman's then bass and drums pairing of David Izenzon and Charles Moffett. That remains to be issued on CD, whilst the excellent Off Centrewith the John Cameron Quartet, which appeared on Dutton-Vocalion in 2005, is now sadly deleted. His final record, The Fence, came out in 1970 and is thankfully available on CD from Huxie Scott & Friends CJA Hall of Fame Members Records, all of which makes this reissue by the ever-reliable Dutton-Vocalion all the more valuable.

Musicians are no different from the rest of us in certain respects. Maybe we all think we have more time. Sadly, for McNair he didn't-he died aged 39 of lung cancer in 1971. Listening to these sides-Harold McNair, in particular-is all the more sad for the sheer joy and vitality of expression that McNair could bring to even the most unpromising material.

McNair's association with pianist/composer John Cameron was a long and mostly productive one and Flute & Nutis too easily dismissed as a collection of mood pieces. It's better than that, though some may find Cameron's orchestral arrangements somewhat showy and ostentatious. They are no more so-less so, perhaps-than those that Quincy Jones wrote to feature Roland Kirk. But the point here is McNair's flute and nothing can detract from that. With lesser talents the strings on "You Are Too Beautiful" would leave one thinking of Mills & Boon. McNair simply cuts through the clutter and in the end his flute is all you can hear, all that matters. His playing on the up-tempo treatment of "The Night Has A Thousand Eyes" is a simply bravura performance. "My Romance" is the only non-flute track here and features McNair on alto, its slightly sour-lemon tone and freshness making for a lovely moment of jazz plus strings. The closer, Cameron's "Burnt Amber," ends the record nicely with what is a fine, swinging piece of big band jazz. Not, by any stroke, McNair's best album but his playing belies any shortcomings of the setting time and again.

There are no reservations about Harold McNair. This is an impressive record. From the opener, "Mento," to the closing track, "The Cottage" these guys are having a ball. The rhythm section contains three stalwarts of British jazz of the period, musicians who have graced many bands and sessions with their talents-Bill Le Sage is always great value. But this is McNair's album. On the lighthearted "Indecision," with its gospel chords, McNair's flute combines with Le Sage's piano and then leaps off into the heavens. Donovan's "Lord of the Reedy River" is even better-Ronnie Scott used much the same arrangement on his Live at Ronnie Scott's (Columbia) LP from 1969, with Kenny Wheeler taking the lead. Here, McNair elegantly exploits the tune's simple melody. Each one of these nine tracks contains its own pleasures-the Kirk-like waltz of "The Hipster," the unbridled swing of "The Cottage," the warm, muscular sound of McNair's tenor on "Darn That Dream," even the almost witty flute on Fain and Webster's insubstantial show-tune "Secret Love." A charming, well-mannered cat-prepare to be charmed.

Tracks: Mento; Indecision; Lord Of The Reedy River; The Hipster; Mini Blues; Secret Love; Darn That Dream; On A Clear Day You Can See Forever; The Cottage.

Tracks: The Umbrella Man; The Night Has a Thousand Eyes; You Are Too Beautiful; Barnes Bridge; Nomadic Joe; Herb Green; My Romance; Burnt Amber.

Tracks: Harold McNair: Mento; Indecision; Lord Of The Reedy River; The Hipster; Mini Blues; Secret Love; Darn That Dream; On A Clear Day You Can See Forever; The Cottage. Tracks: Flute & Nut: The Umbrella Man; The Night Has a Thousand Eyes; You Are Too Beautiful; Barnes Bridge; Nomadic Joe; Herb Green; My Romance; Burnt Amber.