Harold Mabern and Eric Alexander: The Art of Duo

When 68-year-old pianist Harold Mabern performs with 36-year-old tenor saxophonist Eric Alexander as a duo, their age difference might lead those in the audience to assume a mentor-apprentice relationship exists between the two musicians. And that assumption is correct... up to a point.

It's true that Alexander was a student of Mabern's at William Patterson College in New Jersey in the late 1980s. But according to Mabern, he and Alexander are more than musical equals these days. In fact, Mabern notes that over the course of his five-decade recording career, Alexander is his most frequent collaborator.

"I was just thinking this morning that I've been on more records with Eric than anyone else in my whole lifetime, states Mabern during a December telephone conversation from his New Jersey home. "I know we've been on at least 20 albums together between his records, my records and other sessions when you include things that have come out in Japan.

That's a considerable achievement considering that musicians Mabern has recorded multiple albums with over the years includes the likes of Lee Morgan, Freddie Hubbard, Gene Ammons, Wes Montgomery, George Benson, Art Farmer, Cecil Payne, Rahsaan Roland Kirk and Johnny Griffin. In addition, Mabern has played with legends such as Miles Davis, Lionel Hampton, Betty Carter, Sonny Rollins and Sarah Vaughan since leaving his hometown of Memphis, Tennessee, making a name for himself on the Chicago jazz scene and eventually relocating to New York City in 1959. 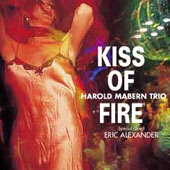 Mabern has been teaching now for 24 years at William Patterson, but those duties haven't slowed down his performing schedule. In fact, Mabern regards teaching young musicians as a way to improve his own musical skills as well.

"I tell people I'm too busy being a student to call myself a teacher, he states. "That's because when you teach, it makes you go inside yourself to examine your own approach and technique. So basically, teaching is learning.

Mabern's teaching approach is based on the lessons he learned as a young pianist—first in Memphis and later in Chicago. Growing up in his hometown, Mabern became friends with musicians like Frank Strozier and Hank Crawford at Manassas High School. Mabern was also strongly influenced by legendary but often overlooked Memphis pianist Phineas Newborn, Jr.

"Next to Chicago, I think Memphis is the most underrated in terms of recognition of the jazz piano players who were from there, he says. For example, Phineas was a true genius as a musician. And James Williams, Donald Brown and Mulgrew Miller also came out of Memphis. And when I went to Chicago after high school, I found out there were so many good piano players that it seemed like there was one on every corner. So from experience, I learned quickly the importance of being ready to play at all times. That meant learning the basic repertoire. And not from fake books. You learn by listening to live performances and to recordings. That's something I pass along to my students.

One of Mabern's students turned out to be Eric Alexander, who had come to William Patterson in 1988 after attending Indiana University for a year—where he discovered he wanted to play jazz instead of classical music and switched to tenor sax from alto. From his first encounter with Alexander, Mabern knew he had a student with incredible potential.

"Eric was in one of my ensemble classes and when he first came to me, I had him play "Embraceable You,' a tune he had never played before,' recalls Mabern. "He picked it up immediately. Right then I knew he was going to do great things. I told him he needed to do three things if he was going to succeed. First, I said learn all the standards. Then learn all your keys so you'll be able to transpose. Finally, I told him he needed to go see George Coleman. He took two lessons with George and the rest was history

Coleman, another Memphis musician Mabern grew up with, has built a reputation as an esteemed tenor saxophonist over the past five decades. In addition to his excellent recordings as a leader, Coleman has worked with Miles Davis, Max Roach, Elvin Jones and Herbie Hancock. He and Mabern worked on the Chicago scene together in the group, MJT+3 before they both migrated to the New York City jazz scene.

Although Mabern has worked with Alexander in a variety of small group settings (including the BeBop Generations band), he regards performing as a piano/sax duo as the most challenging.

"Eric and I just did some duo performances at the Shanghai Jazz Café the first weekend in December, says Mabern. "It was odd—good but very different. I say different because although we didn't have a rhythm section, we tried to play as if we did have bass and drums in addition to my piano. We weren't—as I always say, esoteric, mystic, metaphorical. There's a lot of ways you can play duo, and what we try to do is swing it!

According to Mabern, one of the real secrets to making a duo format without bass and drums work successfully is that each musician must have an innate sense of rhythm that allows them to function and keep time without relying on a rhythm section.

"This duo playing will really test you, he explains. "You've got to carry off enough sense of a rhythm when you play so that people can tap their feet if they want to with the music. And that's a real challenge. But Eric's rhythm is impeccable, and I think my rhythm is pretty good too. Plus you've got to have a two-fisted pianist when you're doing this. And I definitely fit that mold. Although I have to admit I still envy Art Tatum. When it comes to that style, he was the real boss man!

The fact that Mabern and Alexander have worked together so often over the years also provides them with both a deep understanding of each other's musical approach and quite a repertoire to choose from.

"We understand each other, says Mabern. "And we've played together and done enough records together that we know enough songs to probably do a whole month of duo concerts!

Alexander concurs on that point. In the record company biography that accompanied his latest release on the milestone label, Nightlife in Tokyo—on which Mabern plays—the saxophonist discusses the benefits of the musical rapport that he and Mabern have achieved.

It really took me years of playing with him to start to understand his thought process and get to a point of reacting naturally to what he was doing, Alexander says of Mabern. "It's very rewarding because once you begin to approach that level of musical communication, it opens up a whole new world of playing.

For Mabern, the intuitive musical rapport that he and Alexander have achieved also provides a challenge to push the music—to take chances rather than settling into a familiar, comfortable groove.

"Art Blakey used to say that if you don't come out trying to play hard and are worried about making mistakes rather than taking chances, you might as well just go sit down, says Mabern. "So you need to take chances. You have to remember that when you're improvising there's no such thing as a mistake. You might play a wrong note, but what's important is what happens after that—what you play after that is what's important. That's when you discover what the music is all about.