By FLORENCE WETZEL
August 10, 2014
Sign in to view read count 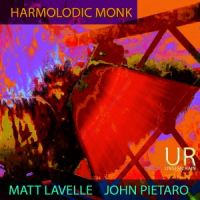 In multi-instrumentalist Matt Lavelle's insightful blog, "That Fat Eb Feels Mahogany to Me," he discusses a challenge shared by many jazz musicians: "With people doing more and more repertoire projects to get work and for sheer love of that artist, I have been thinking about ways to explore the relationships between the kings without doing a straight cop. Playing obscure tunes is one thing, but there must be a way to look at their work from a new perspective."

Happily Lavelle and John Pietaro have found the answer in their excellent release Harmolodic Monk, where they infuse Thelonious Monk's compositions with Ornette Coleman's harmolodic philosophy. It's a natural combination for both Lavelle and Pietaro, who have long enjoyed a fascination with Monk's music, and now finds themselves in mid-career increasingly intrigued by Monk's distinctive melodies and wide-interval blues-swing. Lavelle has also studied with Coleman for many years, both formally and informally, a relationship that has initiated Lavelle in the harmolodic universe as well as allowed him to find his own voice. In addition, Lavelle plays with the grand master Bern Nix, the guitarist in Coleman's groundbreaking group Prime Time, providing a hands-on education in the art of free swing.

The combination of Monk and Coleman is delectable enough, but the duo adds other elements that invigorate the music. Monk used tenor sax and occasionally trumpet in his groups, so Lavelle's alto clarinet, cornet, and flugelhorn saturate the tunes in a wider array of colors. They also dispense with piano and instead Pietaro plays vibraphone, which adds a pleasing dimension to the music, an airy openness that sets up beautiful resonances throughout. In addition to his vibraphone chops, Pietaro is a fine percussionist, adding tasteful accents on a range of instruments including the congas and the bodhrán (Irish frame drum). The duet format is also refreshing, allowing the brilliant corners of these melodies plenty of light to shine without unnecessary embellishment.

The resulting album is a pleasure from start to finish, an hour-and-a-half of fourteen classic Monk tunes, approached with joy and loving care. The album is full of old friends, including "Ruby, My Dear," "Blue Monk," "Epistrophy," "Pannonica," "Crepuscule with Nellie," "Nutty"—the cream of the cream. All the songs are strong, including a spirited version of "In Walked Bud," bolstered by Lavelle's fat, warm cornet and Pietaro's nimble chiming. "Monk's Mood," the album's lone overdub, has a lively arrangement where the alto and cornet play hide-and-seek, with nice percussive accents by Pietaro throughout. And the duet's version of "'Round Midnight" is just sublime, with Lavelle's alto perfectly capturing the song's wistful poignancy, telling a story of lost loves and haunted places, both internal and external.

Judging from the luminous results on Harmolodic Monk, Lavelle and Pietaro have found—nay, invented—a fertile musical vein that's ripe for exploration. Plans are afoot for Harmolodic Duke, Harmolodic Hot Five, and beyond. And why not? As Monk himself said: "All musicians stimulate each other. The vibrations get scattered around."