By MARTIN GLADU
February 11, 2007
Sign in to view read count 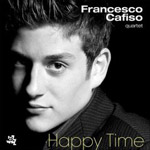 Having won, among many competitions, the International Massimo Urbani Award at age eleven and the EuroJazz Competition at age thirteen, he has also garnered the attention and support of Italy's principal festival organizers and international musicians alike. Even Wynton Marsalis, who called him "the best thirteen-year-old saxophonist he had ever heard, has hired the altoist for his 2002 European tour.

Considering he recorded Happy Time at age sixteen, Cafiso's suprisingly mature style testifies that he absorbed Charlie Parker's bebop vocabulary, as well as Phil Woods and Cannonball Adderley's hard bop phrasing, quite naturally. He masters both genres' idiomatic articulations and possesses a wide-ranging bag of tricks (even throwing the occasional growls and hard-tongued thumps). But he also brings out a lot of himself in his solos, especially on ballads, which he plays convicingly. His dead-on time feel and phrasing exudes confidence and just the right dose of extrovertedness.

While Cafiso's heartfelt melodies and precise playing will likely please connoisseurs, the elementary forms (slow blues, minor blues, "Impressions -like modal, rhythm changes and free) of his pieces might bore some listeners. The two ballads, "Goodbye Elvin and "She Loves Me, bring elegance and variety with stellar playing from Cafiso and drummer Stefano Bagnoli. The latter's reputed brushes playing add rhythmic depth to the quartet's overall sound. Their introduction to opening track, "Louisiana, keenly borrows, in spirit, the aforementioned Elvin Jones' famous duos with John Coltrane.