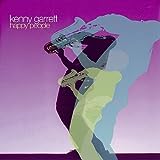 Just going over the press material for this album, I got the distinct impression that there was a pretentious sense of crossover appeal in the mix with verbiage that in effect claimed Garrett was trying to bridge the gap between jazz, hip hop, and world music. As for the music itself, let's just say that too much of what constitutes this mixed bag is simply unbecoming to an artist of Garrett's stature.

Co-producer Marcus Miller shares much of the responsibility for this cloying affair, with slap bass and banal vocals as part of the minefield, not to mention a pretentious dedication to Tiger Woods. Only when Bobby Hutcherson is present and on the cathartic "Brother B. Harper" do we really get a sense of Garrett's great talent, a talent that seems to have been sublimated for the most part since 1996's Pursuance.

Song For DiFang, Happy People, Tango In 6, Ain't Nothing But The Blues, Song #8, Halima's Story, Monk-ing Around, A Hole in One, Thessalonika, Asian Medley, Brother B. Harper