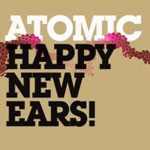 The Swedish-Norwegian quintet Atomic was founded five years ago as an antithesis to the "frosty tundra bite of ECM lyricism," as Atomic's label, Jazzland, describes Atomic's raison d'etre. But things seem to have changed on this, their third studio recording, Happy New Ears!, (not including a Ken Vandermark collaboration, Nuclear Assembly Hall, Okka Disk, 2004).

The members of Atomic—Swedish/Stockholm-based reed player Fredrik Ljungkvist and trumpeter Magnus Broo; and Norwegian/Oslo-based pianist Havard Wiik, bassist Ingebrigt Haker Flaten and drummer Paal Nilssen-Love—sound as if they have begun to embrace some of the ECM ethos, but in a way that challenges accepted conventions about Scandinavian jazz. The members of Atomic are well aware of the fiery American free jazz tradition, but at the same time it derives its identity from more complex and chilly European stylings, or as Vandermark, who hosts all the band's members in his many outfits, defined Atomic: "all the members of the group are more connected to the spirit of jazz than its execution" (in his liner notes to Atomic's Boom Boom, Jazzland, 2003)

Happy New Ears!, released less than a year after the highly acclaimed limited edition three-CD box The Bikini Tapes, was recorded in two sessions last year in Oslo. Ljungkvist is still the main composer, but on this release Wiik contributes four compositions and Broo one more. Ljungkvist is still one of the most unrecognized composers and players in Europe, and he rarely records as a soloist (his excellent quintet recording Yun Kan 12345 on Caprice was released two years ago). His compositions can be ethereal and abstract, like "Cosmatesco," which features the bowed bass of Flaten, the distant piano of Wiik, and his own snaky clarinet lines—or the more explosive "Two Boxes Left," which begins a an intimate dialogue for muted trumpet and clarinet but soon turns into a tight piece that emphasizes the excellent Norwegian rhythm section's almost telepathic interplay and sounds from all over the place that keep propelling the piece. The more relaxed "Poor Denmark" benefits from great interplay by all the members of the quintet.

Broo's "St. Lure Plass" feature a beautiful arrangement for the trumpet and clarinet, that sound part of ECM chamber jazz catalogue and more as a sophisticated West Coast Cool era ensemble. Wiik compositions are more cinematic and present him as a great storyteller and someone who is keen to investigate any musical idea, especially on his, "ABC 101 1," or the intricate chord progression of "Crux." Wiik's losing track, "Closing Stages," sound a bit apocalyptic with the accumulated burning playing of all the quintet members.

Atomic is one of the few jazz bands today that tours regularly. In the last year the quintet covered Europe, Japan, Canada and the States, and these experiences have paid off. Atomic does not feature charismatic bandleaders or boast big gestures from any of its members—instead, it's a working band that is more than the sum of its members' wide and diverse musical backgrounds. Its seriousness, thoughtful, spirited, and imaginative playing always puts the music on top. Atomic into one of the great jazz bands today, and Happy New Ears! is a must-hear disc. Simply fascinating.