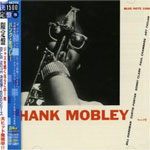 Count yourself fortunate to get your hands on this session, originally released on Blue Note, and not simply for the incredibly hip photo of Mobley on the cover (though I'll admit that's what initially hooked me). On this Toshiba EMI International reissue, the liner notes are in Japanese, the audio is merely "good" (undoubtedly a Van Gelder remastering would provide more presence to both piano and drums), and the front line is probably unknown to many listeners. But in terms of the program, and the execution by the ensemble, as well as the performances of individual soloists, this eponymously titled album belongs with some of Mobley's best sessions.

Curtis Porter is a name I recall only from some of his appearances on Mingus recordings. On alto he has a thoughtful melodic approach and a "cool," assured sound that matches Mobley's unforced lyricism. On tenor, his more aggressive rhythmic phrasing is a complementary contrast to Mobley's seamless melodic stitching.

Bill Hardman, rather than Kenny Dorham, is my candidate for most underrated trumpet player, if not musician, in jazz (boasting three separate tours of duty in as many decades with Art Blakey's Jazz Messengers). Originally a "crackling" hard bopper with blazing technique, crisp articulations, and a no-frills sound, at this time (1957) he was just beginning to play with some of the fuller, more extroverted "romantic" passion of a Clifford Brown, a direction he would take increasingly throughout the '60s and '70s. Dig his solo on "Double Exposure," played with a driving, practically prancing energy that's equalled by few other masters of the horn—and reason enough for Mobley to follow with his own best solo on the date.

Mobley sounds as lyrical, melodically inventive and winsome as ever. Porter picks up a tenor and invites him to turn up the fire on "Bag's Groove," but the leader demurs, sticking to warmth, simplicity and pure musical substance. Sonny Clark's piano accompaniment and soloing are both sterling (more appealing to my ears than his own 1961 session, Leapin' and Lopin'). And though a blowing session, the ensembles are tight, yet featuring a cohesive flow between group and solo sections.

This one belongs right alongside Soul Station, Workout, Another Workout, Roll Call and Mobley's other most frequently played recordings, though it's a shame that the Japanese seem to be the only ones thus far to have recognized its merits.