Hank Mobley: Hank Mobley and his All Stars – Blue Note 1544 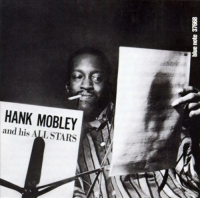 I think I've hit a wall.

I love hard bop. I love Blue Note. But all of a sudden, the thrill is gone.

This week, I'm listening to Hank Mobley and his All Stars, a 1957 album that could never be accused of false advertising. This truly is an all-star hard bop band: Hank Mobley on tenor, Milt Jackson on vibes, Horace Silver on piano, Art Blakey on drums and Doug Watkins on bass. This is, for all intents and purposes, a The Jazz Messengers album.

So why doesn't it move me?

Maybe it's Mobley. The guy is absolutely everywhere in 1950s and '60s Blue Notes. Leonard Feather, in his liner notes to All Stars, says "Hank Mobley shows up at Blue Note almost as regularly as the mailman." And that was in 1957, before Mobley turned out a gazillion other Blue Note albums. So maybe it's over-familiarity that leaves me feeling meh.

I like soulful, toe-tapping bop. Mobley does that, but sometimes it's just run-of-the-mill. The Rolling Stone Jazz Record Guide, for example, says Mobley is "a dependable but not always inspired tenorist" and "the majority of his work is professional rather than memorable."

That's how I feel about Hank Mobley and his All Stars. It's solid—five cuts of unimpeachable hard bop. Well, four cuts of bop and one lovely ballad. There's absolutely nothing wrong with this album, but it doesn't really stand out, either. I've heard it before. The one exception: Milt Jackson. I'm not a huge vibes fan, but it's the one thing that makes this album feel different. It's not that Jackson is doing anything original here. But in the context of an otherwise ordinary bop session, the vibes are like a splash of cold water on a ho-hum day. Refreshing.

Maybe it's just me. Maybe I need a break. Maybe I've finally listened to too many 1950s Blue Notes. Hank Mobley and his All Stars isn't a bad album. But there are better.