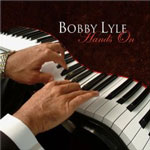 Bobby Lyle has covered a lot of ground in his career. The keyboard/pianist's versatility has surfaced through his efforts as music director for artists like Bette Midler, Al Jarreau and Anita Baker—and jamming, recording or touring with such giants as Jimi Hendrix, Sly and the Family Stone, the Ronnie Laws Band and George Benson. A little bit of everything from Lyle's experience is present on Hands On, a combination of funk, R&B and smooth jazz.

Overall, the album is a bit formulaic. The twelve tracks have less than a one-minute variance. From the 3:42 cover of the Emotions' "Best of My Love to the 4:37 take on the classic "Poinciana, every song fits neatly into the restraints demanded of commercial radio. In addition, Lyle includes some degree of programming on all but the last four tracks, although he includes other musicians—including bassists and a drummer—on most of the songs. It seems to be a requirement among today's instrumentalists.

Hands On opens with the playful "Passion Drive, an easy-going groove that features Dave Caseras on saxophone and Todd Parsnow on guitar. The title song has a strong groove, with Martin Walters providing a funky bass line and Joe Vincelli adding the alto sax lead. Lyle's work on the keys makes this a winner, despite the artificial-sounding drum program. He does a better job of simulating drums on the original ballad "Lost In Our Love, which features co-writer Peabo Bryson on lead vocal. This beautiful song may have the best chance at getting widespread airplay, though the fact that Lyle is present may get lost behind Bryson's easily distinguishable voice.

All but three of the tracks on Hands On are originals, giving the project an air of freshness, in spite of its formulaic elements. While the format-friendly time restraints and programming may turn off hard-core jazz fans, it's still a good album and should be played all the way through at least once. The textbook smooth jazz factors are there, but thanks to Lyle's songwriting and keyboard skills, they don't dominate. Instead of being boring, the music is a mix of charming, laid-back, romantic and danceable grooves.

Passion Drive; Best of My Love; Hands On; Lost In Our Love; Fancy Pants; Poinciana; Minute by Minute; True Spirit; El Paquito; Take a Step; Return of the Genie; Beth.