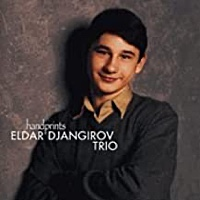 It was the summer of 1996, and Charles McWhorter, a jazz aficionado from New York, was attending a jazz festival in Novosibirsk, the largest city in Siberia, Russia. He could scarcely believe his eyes: the youngster creating the remarkably sophisticated piano jazz to which he was listening was only nine years old! McWhorter immediately invited Eldar Djangirov (pronounced John-GEAR- off) and his parents to the United States from their home in Kyrgyzstan in the former Soviet Union, and in 1998 they came, settling in Kansas City.

Since that time, Eldar has spent four summers at the Interlochen Center for the Arts in Michigan; appeared at the 42nd Annual Grammy Awards Show; been the youngest guest to have appeared on Marian McPartland’s Piano Jazz (Ms. McPartland invited Eldar to play in her Annual Jazz Concert Series at Eastman School of Music in Rochester, NY); won first place at the Lionel Hampton Jazz Festival in 2001 and the Peter Nero Piano Competition in 2002; and performed twice on the Millennium Stage of the Kennedy Center in Washington, DC.

Eldar is now 16 years old. He has released two CDs with his own trio, and his family has recently moved to San Diego. But his status as a prodigy has been even more widely recognized, while his skill and abilities have continued to develop and his creative ideas, to proliferate. Eldar Djangirov's technical facility is dazzling: single-note runs ripple off his fingers as if they were Tatum’s, and his touch is light and true. Sometimes his block chords are Oscar-esque, while his unison runs are reminiscent of Benny Green at his best.

Some may accuse him of gratuitous arpeggiation, but I do not hear embellishment solely for embellishment’s sake. Eldar has a wonderful, lyrical way with a ballad, playing with a maturity that belies his tender age. (I doubt that I knew what heartbreak feels like when I was 16, and I certainly can’t imagine conveying it!)

It should be clearly obvious by now that Eldar is the real deal. You will not be disappointed with this disc, and you should not pass up an opportunity to catch Eldar live. He is truly a phenomenon. But, more importantly, this is just darned good music.