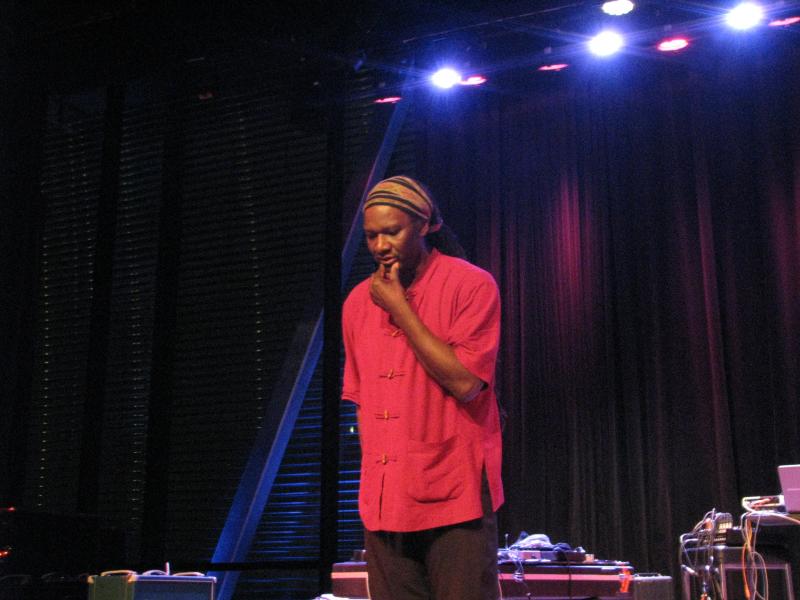 World-renowned Amsterdam Bimhuis invited illustrious Chicagoan drummer/percussionist Hamid Drake for a carte blanche night on January 23rd. This article covers the event and adds some background notes. Hamid Drake frequently performs at this venue. To date he played Bimhuis 18 times in its 40 years of existence. When we consider this as well as his enormous musical range a festival would be necessary to represent him and his work. It would be no doubt a challenging transcending festival spanning several days. For a single carte blanche night however tough choices had to be made from many attractive options.

Drake could have worked with some nice musical contrasts or complementarities, yet his main concern was to take a step forward. His definite choice was as surprising as obvious. He decided to conduct an unlikely encounter between members of good old Amsterdam ICP Orchestra, two young upcoming musicians, Italian vibraphonist Pasquale Mirra and Slovenian pianist Kaja Draksler, and the live remix crew of trailblazing Norwegian PUNKT with its far-reaching metamorphosis of music. The ICP-crew comprised Wolter Wierbos on trombone, Ab Baars and Michael Moore on saxophone and clarinet, Ernst Glerum on double bass and Kaja Draksler on piano. The PUNKT-crew brought Jan Bang and Erik Honore electronics, guitarist Eivind Aarset and Hamid Drake on drums/percussion. The introductory performance of the night was given by the duo of Hamid Drake and Italian vibraphonist Pasquale Mirra, representing Drake's work with other percussionists like Adam Rudolph and Michael Zerang.

What these parties share is the principle of instant composing: the open form, the improvisational attitude of creating music in real time. The difference lies in their modus operandi and the variety of instruments used. The ICP musicians (re)act instantly to/on the contributions of their fellow musicians; The PUNKT musicians together act on a preceding performance as a whole in their subsequent improvised live remix with electronic and acoustic instruments. Hamid Drake brought it together and challenged these musicians to inventively re-orientate and rewrite their routines. He, at the center, was free and bound to lead acoustic-/analog-oriented musicians towards ambient electronics, vice versa.

Hamid Drake is one of the most illustrious, distinct and open-minded percussionists of this moment. Deeply rooted in the Afro-American tradition he covers a broad musical range in his collaborations. As a firmly grounded independent spirit he crossed the field of improvisation in jazz and world music in ever challenged and challenging ways. It is not, however, merely an ability to navigate into, through and out of differing musical fields. Drake is a highly precise and primarily spatial drummer with a great way of handling space, volume, repetition, and periodicity. This is intimately connected with his general appearance, his stature, and presence during his actions: with a majestic glow and elegant smile he channels cosmic energies into sound waves and eruptions.

Listening to and watching Drake's play in differing contexts, works as an ear-opener. He is one of the drummers that enable listeners not only to hear the differences but also very clearly the common ground on a deeper level. In Free Improvisation Drake creates a rhythmical circulation that enables horn players to embrace, slip in and act out. The sounds of Peter Brötzmann, for example, get an extra strong and deep charge in Drake's company. Conversely in other, straighter contexts Drake evokes a deeper rawness and edge.

The unity of the diverse musical sources Drake went through and makes use of is represented best in his plentiful work with great Chicagoan reedman Fred Anderson (1929-2010). As Drake stated early in the evening, Baba Anderson was a life long stimulator, guide and companion. You can experience this on their wonderful last album From The River To The Ocean (2007, Thrill Jockey) that bears witness of it. Other important formative influences were trumpeter Don Cherry and drummer Ed Blackwell he both met as a young musician when he started to work in Foday Muso Suso's Mandingo Griot Society together with his peer, percussionist Adam Rudolph, by the late '70s. The first album of the Mandingo Griot Society (with guesting Don Cherry) anticipated on the legendary CODONA-series of the early '80s with percussionists Collin Walcott, Nana Vasconcelos and Don Cherry as forerunners of present world music and world jazz.

Drake is at home at many sections, styles of music through his distinctive voice. Numerous varied collaborations with musicians and groups in/from Europe, Africa, Asia and the Caribbean bear witness of that. Reggae apparently is a special passion and connecting force for him. He is working in those contexts so intensely that people often know his work only partially due to their own preferences and focus. Nowadays there are few musicians who spiritually, creatively and practically span such a variety and range with their distinctive voice (for an introductory cross sectional radio feature (on demand) see HAMID DRAKE part 1 ... and see HAMID DRAKE part 2 ...).

Considering this and Drake's urge to move forward (or inward) to broaden the musical scope by creative invention, his PUNKT participation came into being quite naturally three years ago. It started at a PUNKT Paris event and continued at PUNKT events in Italy (Milano), and Norway (Kristiansand)(see more HERE ...). Drake participated in and contributed to the input side as well as on the live remix side of it. In Paris he performed in a trio with Ethiopian vocalist Etenesh Wassié and French guitarist Mathieu Sourisseau and did a live remix with saxophonist Evan Parker, trumpeter Nils Petter Molvaer, guitarist Eivind Aarset and the electronics/sampling of Jan Bang and Erik Honoré -a multifaceted crew. The presence of Evan Parker here is not that astonishing either. Parker was one of the first improvisers working with live electronics with The Music Improvising Company (Derek Bailey, Hugh Davis, Jamie Muir, Christine Jeffrey) in the late 60s. Their first recording was released as 4th album of the ECM-label's catalogue. More electronic albums by Parker's Electro-Acoustic Ensemble followed.

Live remix as a connecting and unifying procedure

Drake's carte blanche had a forceful focus on the live-remix as a connecting and unifying procedure, which was still more enforced by the fact that it was a premiere in Amsterdam and the first time a PUNKT remix took place in The Netherlands. At the beginning of the concerts Drake recalled Don Cherry who made his first record with electronics almost 50 years ago. In 1969 he recorded the Human Music album as a duo with electronics pioneer Jon Appleton, for Bob Thiele's Dutchman label. It happened just two years after the release of Morton Subnotik's groundbreaking album Silver Apples From The Moon.

During the carte blanche program two methods (or procedures) of improvising were 'combined': the ICP and PUNKT method. Both parties share the principle of instant composing: the open form, the improvisational attitude of creating music in real time. The difference lies in their modus operandi and the variety of instruments used. The ICP musicians (re)act instantly on/to the contributions of their fellow musicians; PUNKT musicians together act on a preceding performance as a whole in their subsequent live-remix improvisation with the aid of electronic and acoustic instruments.

A live remix differs from a studio remix in a couple of respects. In the studio there's more time and the possibility to retry. In the studio it is possible to listen to the input-piece of the mix again and again. The same goes up for manipulations. There might be collaboration between more people, but very often one person/author is responsible for the remix. In a live remix this reshaping has to be a joint effort, a real-time processing collaboration between a number of musicians using electronic devices, acoustic instruments and voice(s). The input of the live remix is an immediately preceding performance by a group of other musicians. The remix crew listens to/watches the performance and take decisions on what to do, how to proceed, what to use, etc.. These decisions can be taken in advance and/or during the improvisation itself. Live remixes are very often aided by electronic devices—joined by traditional (acoustic) instruments/voices. It is not necessary, however, to base a live remix on electronics. It would be possible too to do it purely with acoustic instruments and solely based on the musicians memory. It happened a few years ago at the PUNKT FESTIVAL in a live remix by Norwegian-French group Dans Les Arbres (Christian Wallumrod, Ivar Grydeland, Xavier Charles, and Ingar Zach). This does, however, require special skills in terms of memory, accessing speed, and listening skills of the musicians. With the aid of electronic sound sampling equipment and manipulation processes the outcomes are more liquid, layered and porous, opening up a lot of new possibilities. Although it wouldn't be a surprise if the electronic treatment would have an impact on purely acoustic improvisation in the long run.

The concept of live remixes not only allows for endless variation (of different order); it is in a way an exteriorization of the musical listening process. We hear what we want to hear or what we are used to hearing. But there will always be more or less unknown elements and characteristics that challenge the listener to assimilate or to accommodate to, to evade or to transform. In a live remix you can hear what the remixing musicians hear or want to hear. The result is a merging of known and unknown things. Certain forms of music making might or want to challenge the listening process. In the live remix it is made more made more translucent and tangible and gets its own epic form.

As mentioned before, Hamid Drake's Carte Blanche night consisted of three parts: a duo opening with young Italian vibraphonist Pasquale Mirra, a contribution by the five musicians of the Amsterdam impro-scene, and a live remix by a PUNKT-crew including Hamid Drake himself together with Jan Bang, Erik Honoré, and Eivind Aarset.

Hamid Drake and vibraphonist Pasquale Mirra have been working as a duo since 2008 and form a proven unit. They took off at a highly energetic pace right from the start. From their first beat and sound their music had a strong African vibe and flavor. Mirra, an agile musician with a very unique style, wonderfully extended Drake's circulating beats with his wonderfully tinkling and chiming metallophonic sounds.

Gradually their music turned into the melodism of a longer chant, "Born upon a Lotus." Drake commenced to sing after switching to the big frame drum. Mirra enhanced the chant's unfolding beauty by applying endearing and subtle varieties of the percussive possibilities of his instrument. It included spontaneous preparations—with aluminum foil amongst others -and extended techniques. Following the music's own way a moving document of deep personal expression arose from the two musicians' weaving.