By C. MICHAEL BAILEY
November 7, 2015
Sign in to view read count
Track review of "Softly, As in a Morning Sunrise" 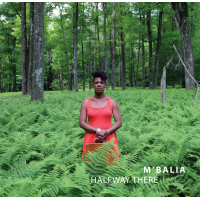 Halfway There is the debut recording of one Philadelphia- native M'Balia Singley, a talented singer matriculating from Yale with a degree in history and Temple with one in law. That is an embarrassment of riches. But can counselor Singley translate all of this brain power into music? Her life arc had her practicing law and raising a family before returning to music. When she did return, she did so in the company of New York pianist Orrin Evans whose influence on this recording is potently felt in the edge his playing gives these nine disparate performances making up the record.

"Softly, In a Morning Sunrise" (one of the two greatest ballads, along with "The Way You Look Tonight) is a daring piece to apply M'Balia's and Evans' forward musical thinking. The introduction is extended and airy. Evans summons some impressionistic motifs, testing the waters before committing to the performance. Bassist Mike Boone sets up a steady Sade momentum that owes as much to Anita Baker as it does to Frank Sinatra. Evans approaches his solo quietly and with much thought. He is Count Basie-stingy with notes, if the Count had smoke a bowl of opium, having a pipe dream about Bill Evans. M'Balia sings with assertive verve and distinction, transforming this ballad into a groove reverie.