Madeleine Peyroux: Half The Perfect World

By GINA VODEGEL
September 5, 2006
Sign in to view read count 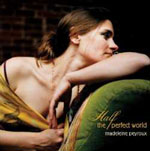 Madeleine Peyroux co-wrote four of twelve songs on Half The Perfect World. Leonard Cohen/Anjani Thomas connoisseurs will recognize the title, but not the track itself. Peyroux stripped it from Anjani's stilled elegance and turned it into a soft tropical breeze, a melancholy bossa nova with a sense of longing and desire that makes you wonder whether you should be happy or sad, or maybe even both.

Although she's known, loved and rejected for evoking and provoking the memory of Billie Holiday, Peyroux is bound to bring those hesitant to embrace her music without prejudice into a difficult position. The opening "I'm All Right, co-written by producer Larry Klein and Steely Dan's Walter Becker, is a surprisingly charming tune, full of optimism and playfulness; her laughter sends high hopes for the rest of the album.

And as the songs one by one stroll in their separate yet strong presence, it becomes clear that Peyroux has found a voice to call her own: Joni Mitchell's "River in a duet with K.D. Lang—or Tom Waits' "The Heart Of Saturday Night, featuring Till Bronner on muted trumpet and Greg Leisz on pedal steel guitar—make you think she's singing for you exclusively. She's accompanied by musicians like Dean Parks, Sam Yahel (Norah Jones, Bill Frisell), David Piltch (bassist for Canadian singer Holly Cole, whose album Dark Dear Heart was also produced by Larry Klein; she recorded Joni's "River, too), Jay Bellerose and drummer Scott Amendola (on tour with Peyroux), to name just a few.

Each song is delivered with a refreshing intensity. The sound of a ukelele, a Wurlitzer, or the Hammond organ add subtile accents, as do the tasteful string arrangements on Serge Gainsbourg's "La Javanaise and the beautiful lingering "Once In A While, one of Peyroux's own compositions. It's this particular track that seems to capture the essence of her spirit when recording: "I'm tired of dying, I'm living instead," she sings. That leaves us with no other choice than to agree in accordance with the closing track of this enchanting album.

I'm All Right; The Summer Wind; Blue Alert; Everybody's Talkin'; River; A Little Bit; Once In A While; (Looking For) The Heart Of Saturday Night; Half The Perfect World; La Javanaise; California Rain; Smile.