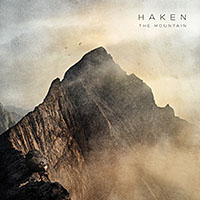 Haken
The Mountain
Inside Out Records
2013

For a group as young as Britain's Haken to find The Mountain selected by Prog Magazine's readers as one of "The 100 Greatest Prog Albums Albums of All Time"—and at an über-respectable position of #54—is a remarkable enough feat for a group with only two albums prior to this, its third record following its 2010 debut, Aquarius and 2011's Vision (all on Inside Out Records). That this hour-long (plus two bonus tracks) concept album actually beat out long-held classics of the genre like Rick Wakeman's The Six Wives of Henry VIII (A&M, 1973, #92), Mike Oldfield's similarly mega-selling Tubular Bells (Virgin, 1973, #60), King Crimson's career-shifting Discipline (E.G., 1981,#70), Supertramp's 1977 breakthrough Crime of the Century (A&M, #77) and Van der Graaf Generator's post-hiatus masterpiece Godbluff (Charisma, 1974, #73) is an even more monumental achievement...and more than reason enough for Rediscovery.

While categorized in the sub-genre of Progressive Metal—and yes, there are some righteously crunching guitar power chords and thundering riffs to suggest that, at the very least, metal is in this British sextet's blood—like Sweden's darker, more hardcore Opeth and Pain of Salvation, to describe the group as such would be intrinsically and unfairly self-limiting. Like Opeth and PoS (in particular Opeth,whose last two albums have been unapologetically progressive, with little to none of the growling vocals and fist-pumping, ear-shattering power of earlier albums), Haken is much broader than that...but truthfully, unlike their Swedish cousins, it's always been so.

If anything—just like fellow Brits Sanguine Hum, whose Now We Have Light (Esoteric Antenna), Steven Wilson's similarly concept-driven Hand. Cannot. Erase (Kscope) and Van Der Graaf Generator's live Merlin Atmos (Esoteric Antenna) all suggest that Prog Magazine's 2014 poll may be in need of an update (and soon)—Haken and The Mountain make clear that progressive rock may not be held in the same popular (i.e. sales) esteem it once was, but it most certainly is back with a vengeance. Yes, there are groups who are so rooted in the past as to make the genre seem more like a museum piece than a living, breathing thing, but many young groups—like, in addition to Haken, Wilson and Sanguine Hum, the UK's Syd Arthur, Tin Spirits and Big Big Train; Italy's Accordo dei Contrari and Finisterre; Norway's White Willow, Gazpacho and Hedvig Mollestad Thomassen; Poland's Riverside; and Sweden's Beardfish, Änglagård and Anekdoten—are now demonstrating that, after a couple of decades of being a dirty word amongst many musicians and fans, progressive rock is not only back...it's progressing, too.

Sure, there are trace elements of '70s groups like Gentle Giant in Haken's use of contrapuntal vocals on tracks like "Cockroach King" and "Somebody," but it's always an inspiration rather than something being overtly lifted. There are plenty of irregular meters to be found, like on the 5/4-driven "Pareidola," but with trace elements of Indian music buried in the mix, nods to legacy groups like Genesis—and, in Raymond Hearne's thundering, Mike Portnoy-inspired drum work and the rest of the group's similarly unrelenting technical acumen, no shortage of Dream Theater-inspired virtuosity—Haken casts a broad net in its influences, even as it touches on things like ambient music, minimalism...even some staggering glitch-hop drumming on "Because It's There," which helps bring the concept album together thematically with a majestic choral introduction that suggests at least one of these guys spent time in a boy's choir in his youth.

For all the hard-hitting tracks like "Falling Back to Earth," there are moments of unadorned beauty on the opening, theme-setting "The Path" and darker-hued, piano- driven "As Death Embraces." It's an album that, by stretching beyond progressive metal's four corners, pushes its fans to stretch their ears, just as it encourages those predisposed to the more intrinsic thematic lyricism of legacy progressive rock, and its mellotron and synth-driven colors, to open their ears (and minds and bodies) to a far more visceral and aggressive kind of catharsis.

Critically, The Mountain was divisive, with some reviewers loving the record, calling it "quite possibly the greatest statement in progressive metal yet released in 2013," while others found it "a chore, an overlong, indulgent, and occasionally annoying odyssey." There's no doubt that it's a challenging record, truly meriting considerable spins before passing any judgement; but with Haken preparing to cross the pond for a ten-date North American tour and an EP, Restoration (Inside Out, 2014) out recently, there's plenty of hope that the music of The Mountain will figure largely in the group's set list. In the meantime, after having put the album away for awhile to focus on more recent releases, The Mountain is an album that—sounding positively massive on my Tetra Listening Instruments—is surely rife for Rediscovery as the group's late April date at Montreal's Club Soda (sharing the bill with Spock's Beard) approaches.