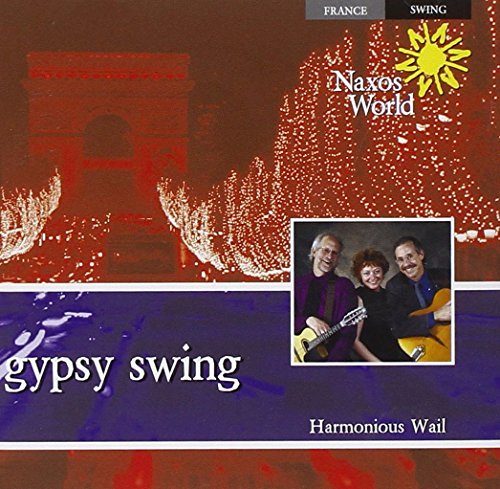 It is fairly impossible to discuss "gypsy swing" without discussing Django Reinhardt. The two entities are synonymous. Reinhardt, along with violinist cohort Stephane Grappelli, made a significant contribution to the development of American jazz with their Quintet du Hot club de France. The music, produced between the 1930s and 1950s, was firmly grounded in the American swing tradition and incorporated many of the folk elements from France and Belgium. One cannot listen to this music and not be transported to a gypsy camp, sitting among wooden wagons, the smell of unfiltered cigarettes, wine and strong coffee in the air?and this music being played.

Harmonious Wail is a Midwestern quartet from Madison, Wisconsin. Formed in 1987, the group has specialized in the gypsy swing of Reinhardt, Grappelli, and others. On Gypsy Swing, the group concentrates on jazz standards interpreted by Reinhardt and Grappelli and adds a single effective Reinhardt composition, "Minor Swing." From the Reinhardt/Grappelli songbook spring "St. Louis Blues," "Rose Room," "Sheik of Arby," and "Like House Blues" all performed with that Sinti Gypsy flair for dramatic and passionate music. On the vocal selections, Maggie Delaney-Pott delivers the goods with sensuous obtuseness, leaving just enough room for you to wonder if her seduction is sincere or if she is merely playing with you (just check out "St. Louis Blues" and a frenetic "After You’ve Gone"). Sims Delaney-Potthoff peppers the music with Jethro Burns-inspired mandolin and doubles on the tenor guitar.

Gypsy Swing is joyful music with the attic scent of melancholia. It sounds at once fresh and dated, nostalgia clinging when we the listeners, have no reason for nostalgia. Powerful and provocative, this is dense and pleasing music well played.