By MARTIN LONGLEY
December 14, 2008
Sign in to view read count 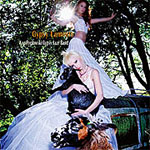 This is a gypsy combo of the Django Reinhardt persuasion, rather than being fully-crazed wedding party cacophony. In fact, reedman Ken Peplowski makes matters even more specialized by concentrating on a preponderance of slow plodders rather than the frenetic hurtling that many gypsy jazz guitar outfits now prefer. The album's cover is slightly strange. Two pseudo-brides in billowing white silk cavort with a pair of goats. Is this what gypsy life entails?

Half of the compositions are written by the old Belgian guitar master Reinhardt, with Peplowski flanked by guitarists Bucky Pizzarelli and Howard Alden, which is certainly an impressive way to be surrounded. This is a world where reeds are not always invited, but Peplowski smoothly slides in his clarinet and tenor saxophone, delivering some of the most sensitive solos of his career. Pizzarelli and Alden opt for steely picking, bright with a percussive attack, but it sounds like it's the former who's taking most of the solos.

The playing, arrangements and production qualities make this a disc to savor, even though it would benefit from a few more briskly trotting numbers. Peplowski's oozing clarinet closeness on "Anouman" sinks the listener into a less familiar Reinhardt tune. Next up, his tenor tone on "Crepuscule" is magnificent; sounding like the mic is buried deep inside its velvet-lined bowels.

Violinist Aaron Weinstein isn't around much, but when he's soloing, the impact is noticeable. He's half slick sluice, half hot friction. The guitars engage in a dialogue during "I'm Confessin,'" the leader layers up both of his horns on "Please," conversing with himself, while it's just Peplowski and Pizzarelli together for the closing "Time On My Hands." This album is an oldster's reflection, but this is no bad thing. Peplowski burns up frequently during other sessions, so a reclined set makes for a pleasurable change.