Gypsy Jazz: In Search of Django Reinhardt and the Soul of Gypsy Swing

By FLORENCE WETZEL
April 4, 2011
Sign in to view read count 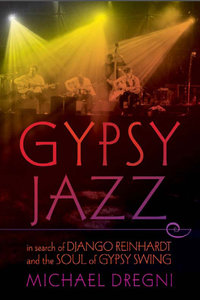 Gypsy Jazz: In Search of Django Reinhardt and the Soul of Gypsy Swing

Midnight, Pigalle. The red-light district of Paris glows in a nocturnal carnival of neon and incandescent color....

Welcome to Michael Dregin's engaging Gypsy Jazz: In Search of Django Reinhardt and the Soul of Gypsy Swing, a highly original book that's part history, part detective story and part travelogue. Dregin takes the reader along as he lovingly uncovers the the world of Gypsy jazz, a journey that includes descending into shady Parisian bars, exploring caravans hidden deep in the woods, and dodging crowds at a religious festival where sublime music and knife fights interweave seamlessly.

The first third of the book is largely a biography of Django Reinhardt (1910-1953), although the guitarist's spirit and name infuse the entire book. Like many Romani musicians, Reinhardt was a child prodigy who started performing publicly at an early age. He was already recognized as an exceptional Romani musician when he was exposed to jazz in 1924 in a Parisian nightclub. Thus began the amalgam of two powerful musical streams, which grew over the years and was cemented in 1931 when Reinhardt first heard a recording of Louis Armstrong. Reinhardt burst into tears and repeated over and over, "My brother! My brother!"

Reinhardt was properly lauded in his lifetime as the genius and groundbreaker he was, but his life was not always easy. A caravan fire in 1928 left two fingers on his left hand completely useless, after which Reinhardt painstakingly retaught himself to play guitar. The Nazis murdered millions of his compatriots during World War II, and Reinhardt had to negotiate the complex Nazi attitude toward jazz, which involved outlawing jazz as degenerate music while at the same time German officers heaped praise on him in the Parisian clubs. He never broke into the American entertainment world the way he hoped to, despite a 1946 American tour with pianist Duke Ellington's orchestra, and he had to fend his way in the music business without knowing how to read or write—in fact, violinist and playing partner Stephane Grappelli was the one who finally taught Reinhardt how to sign his name.

And yet through it all, Reinhart remained true to his Gypsy roots. Even at the height of his wealth, he preferred caravans and sleeping outside to luxurious Parisian apartments. He was not particularly impressed with the niceties of the professional music world; he was renowned for showing up late (or not at all) for gigs and recording sessions, and it was not uncommon for him to simply disappear at a moment's notice, on the road and leaving no trace.

Reinhardt died suddenly at age 43 of a cerebral hemorrhage, and yet the story of Gypsy jazz does not stop with his death. Dregin does a wonderful job bringing to life the different branches of the style, which are organized mostly around family clans. Take Reinhardt's family, for example: his brother Nin-Nin Reinhardt was his immediate successor, but his progeny from his first wife constitute one branch, including his son Lousson Baumgartner and his great-grandson Dallas Baumgartner. Another branch is Reinhardt's family by his second wife, including his son Babik Reinhardt and Babik's son David Reinhardt. In fact, the author describes a guitar lesson from David Reinhardt, illustrating the unique Romani method of teaching, which includes mimicking by ear as well as the occasional hand slap.

But Reinhardt's kin are only the tip of the iceberg. Gypsy jazz musicians include well-known names such as keyboardist Joe Zawinul, saxophonist Rick Margitza and, of course, the Gipsy Kings with their international hit "Bamboleo." But it also includes musicians who might be unknown to most jazz fans but are legends for the Romani, such as guitarist Gusti Malha, guitarist/gangster Baro Ferret, American Gypsy guitarist Danny Fender, and gypsy rapper Syntax.

Part of the difficulty of tracing the history of Gypsy jazz is that until recently the Romani had no written history. But as the Romani themselves say, their history is in their music, and Dregin does a beautiful job tracking down the details and making the people and music come alive. Gypsy Jazz is an important and delightful addition to the ongoing story of Gypsy jazz, and provides an essential bridge to this fascinating people and their culture.