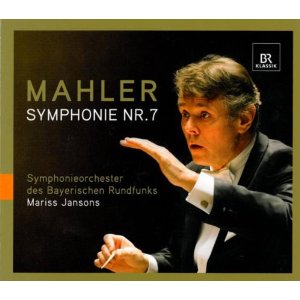 Gustav Mahler's 7th Symphony, first performed in 1908 under the baton of the composer in Prague, is felt by many to be a colorful vision of a night-time journey. The symphony (or at least the first movement) could equally give the impression of the entry to and exploring of a new city, or some kind of adventure, and so has a motivating (or "motor-vating") side also. The work is also notable for containing parts for both guitar and mandolin, yielding a quasi prog-rock element (literally), depending on how they are recorded, into the mix in the fourth serenade-style movement.

The recent release by Mariss Jansons and the Bavarian Radio Symphony Orchestra of this live version of the symphony has magnificent and clear (firmly accented) playing. There is the stunning three octave deep repeated figure from the strings in the tuneful and uplifting second movement (replete with cowbells: if you want "more cowbell" just turn it up), the much-praised recording of the guitar and the mandolin in the fourth movement, and the deep evocation of Mahler's "broad daylight" at the end. For some observers it is now the copy to own (though versions by Rafael Kubeilk, Bernard Haitink, Lorin Maazel, David Zinman, Daniel Barenboim and Claudio Abbado—he is a good choice for virtually any music—have their proponents).

The recording is on the orchestra's label, and is an example of the new trend where some orchestras are now releasing works on their own labels. If you are playing, you may as well set up the mics and keep all the money from the sales.

The symphony has high trumpet parts at the beginning, and when a trumpeter in the orchestra at the premiere challenged Mahler about it, the composer is said to have later told his wife: "He doesn't understand the agony of his own existence." If the trumpets are cries of despair, that feeling is soon left behind as the journey commences.

Mahler's symphonies are dense pictures of sounds and visions, very multi-dimensional. Anything from birds to forests to startling vistas may strike the ear. The 7th is no exception, and at one hour and seventeen minutes, there is a lot of time for Mahler to describe the world here. This recording communicates all the notes: one reviewer states that he has never heard such detail in the symphony as is revealed as on this recording. It is a vibrant sound, with the added tension of being live.

Mahler was not averse to taking popular tunes and reshaping them, for example the minor key take on of "Frere Jacques" in his 1st Symphony. In the 7th, popular tunes and waltzes appear, there is a brief and beautiful three note reference to Richard Wagner, and then there is the "quote"-filled last movement of the 7th which includes an apparent gesture towards "Faniculi Fanicula."

There is therefore a link to relatively modern popular music in Mahler. The "prog element" in the 7th arrives towards the end of the fourth movement, when the sudden, clear sound of an acoustic, rock-like guitar conjures up a flowery 1967/68 effort by the Moody Blues, as for example on Days Of Future Past (Deram Records, 1967). This is not such a far-fetched parallel: their label had wanted the band to record a rock version of Anton Dvorak's New World Symphony instead. The sudden odd harmonies (and oblique popular song qualities) of this movement, coming after the more somber third movement, bring to mind the mood-changing effect of later songs in the semi-"symphonic" shape (that is, in terms of the successive keys of the songs) of Pink Floyd's Dark Side Of The Moon (Harvest/Capitol, 1973).

All of these aspects are well demonstrated by this recording. The colorful clarity of Toscanini's LPs (of Haydn and Beethoven and so on) is brought to mind, but with a lusher touch, possibly provided by the music itself as much as the orchestra.

Mahler's Symphony No. 7 was originally not the most recorded of his symphonies, but it has seen quite a few recordings in recent years. This recording by Mariss Jansons and the Bavarian Radio Symphony Orchestra may be the best. The bright and fresh approach guarantees it a wide appeal. Maybe even to prog-rock fans.