By EYAL HAREUVENI
January 30, 2014
Sign in to view read count 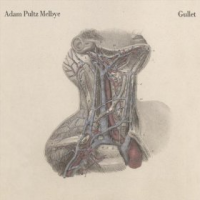 The title of the first solo album of prolific Danish double bassist Adam Pultz Melbye is inspired by a quote from Samuel Beckett novel Watt (published in 1953). Metaphorically, Melbye follows Beckett's words, determined to liberate himself from a symbolic deep-toned sonic gullet filled with known articulations, a reinvent and explore new dimensions, colors and sounds in the infinite vocabulary of his trusty instruments.

Melbye, now resides in Berlin and is one of the busiest musicians in the Danish scene. He is one of the founders of the Barefoot label and musicians collective, working with numerous Danish and other European regular and ad-hoc collaborations with Peter Brötzmann, Ken Vandermark, Lotte Anker, Fred Lonberg-Holm and the London Improvisers Orchestra.

Melbye, gifted with masterful and highly creative command of the double bass, uncovers the insides of this massive instrument in a series of nine concise improvisations. He begins on "Knee Right" with a methodical exploration of the different sonic qualities of the exact moment in which the bow is attached to the strings or the wooden body of the bass and the free associations following this formative gesture. "This" investigates the delicate sonic relations that occur within random a pizzicato touch of the strings. On the following track "On the Nothing New," and later on "Attempts at Relevance," he creates disturbing, quiet storms of fleeting overtones with the bow. "Dukkha," the Buddhist term for suffering, is a profound, minimalist recitation of deep sounds, as a secular, modest ritual.

Melbye wrestles with the double bass on the intense title piece, searching to structure narrative and coherence from this muscular improvisation, only to find that him and the instrument are equals, completing each other. "That" is a wise and playful improvisation that employs the resonating wooden characteristics of the bass and on "Zossener" it sounds as if the bow is the main instrument and the double bass is employing various extended techniques on the bow. "Knee Left" returns to the opening improvisation, applying similar methods and reaching a satisfying closure in this arresting journey.

Knee Right; This; On the Nothing New; Dukkha; Gullet; That; Attempts at Relevance; Zossener; Knee Left.