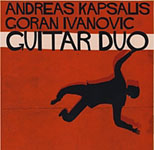 Guitar Duo is a genre-melding, musically captivating CD by the virtuosic guitar pairing of Goran Ivanovic and Andreas Kapsalis. Ivanovic, who draws from the classical and Eastern European folk traditions, and Kapsalis, who brings a finger-style background to the duo, come together to produce an album that is both intellectually stimulating and fun to hear. The pieces contain elements of rock, folk, jazz, classical and finger-style music, yet the music supersedes those individual genres to create a musical landscape that is beyond labels, beyond categorization and beyond limits.

All of the songs, with the exception of "Kalajdzisko Oro," were composed and arranged by the two guitarists. The tunes are neither fully composed nor fully improvised, with the exception of "Improvisation for Satie," which is a duo improvisation in the style of the famed composer. The other tunes are a mixture of rhythmic and melodic motives that are intertwined with sections of solo or duo improvisations. While some improv sections are easy to pick out, such as the solos on the Brazilian-influenced "Samba in 10," where each guitarist lays out a single-line-based improv, others are much more subtle. Tunes such as the dissonantly engaging "Vertigo" do not have sections devoted to solos per se, but the improvisation lies in the interpretation of the piece's different melodic sections. With each guitarist playing off of the other, dancing between single lines, dynamic chordal sections and percussive tapping, the song breathes an air of free improvisation while keeping one foot secured within the realm of structured composition.

One of the album's most engaging elements is the way that each guitarist brings individual influences and style to the table without being overbearing or crowding the other out of the musical picture. Ivanovic's Balkan music background comes forth in the rhythmic complexity and diversity of tunes such as "Shadow Thief" and "Arrhythmia," while Kapsalis lifts "Turritopsis Nutricula" and "Prorok" to new heights with his tasteful use of two-handed percussive tapping. Aside from the musicality that each player displays on the album, the sheer technical virtuosity cannot be ignored. Not ones to rely on technique for the sake of it, their lightning fast runs and complex chordal passages are always saved for the right moment, when these devices sound effective and passionate, not egotistical.

Each piece on Guitar Duo is carefully crafted without sounding overly composed or, at the other end of the spectrum, unintentional. There is never a note out of place or context, even when a piece makes sudden shifts between rock, jazz, folk and classical grooves. With such a varied set of styles and genres, the CD could have easily come out sounding sloppy, disjointed or unprepared, but these two experienced guitarists knock down the walls of genre and style to create music that is unique and meaningful.