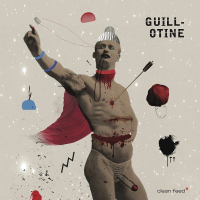 Many people know the opening lines of Charles Dickens' A Tale Of Two Cities: "It was the best of times, it was the worst of times." But how many remember the author goes on to report on an age of wisdom/foolishness, an epoch of belief/incredulity, a season of light/darkness and the spring of hope/winter of despair? He certainly could be writing about recycling/climate warming, diversity/white supremacists and tolerance/religious extremists.

Revolution is a suitable topic for Portuguese guitarist Luís Lopes to explore with his trio Guillotine, made up of French cellist Valentin Ceccaldi and Norwegian drummer Andreas Wildhagen. Just when you might expect Lopes to deliver another one of his patented electric freak outs, he delivers insightfully composed and arranged material. But we're talking the French revolution here, there's going to be blood. The angry mob's implement of choice was the guillotine. The opening "Prologue" enters furtively enough with cymbal strikes (more like touches) as preamble to the lightning and crash of thunder—guitar, cello and drum skins are struck and driven in an exorcism of sound.The psychic clash of electric guitar and amplified cello churn until Ceccaldi solos with bowed determination, creating a kind of electric chair of density.

The progression of "Marie Antoinette" and "Guillotine (Epilogue) Diptych" follows similar paths. Sympathetic openings give way to a ferocity in the same manner you might expect from a Lopes session. The music is tribal and chaotic, but hey, you say you want a revolution. Well, you know, we all want to change the world. When it happens, Guillotine ought to be the official band.