Daryl Sherman: Guess Who's In Town? 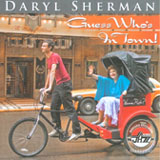 Vocalist-pianist Daryl Sherman performs every week at the Waldorf-Astoria, playing the same piano on which Cole Porter composed. Sherman is the right player for such a setting and such an instrument; she's a swing musician in the most traditional sense of that phrase. Where many singers seek novelty in the hybridization of jazz with other musical idioms, Sherman remains true to a straight-ahead interpretation of jazz standards from the early part of the last century. (Such an orthodox singer is truly the novelty these days.) And Sherman's latest release—Guess Who's In Town?—her fourth album for Arbors Records, reminds us just how uplifting straight-ahead jazz can be.

Sherman approaches each of the 15 tunes on the CD in a candid, unhurried manner. She's backed by some of New York's most established sidemen, and as it goes, few jazz singers accompany themselves or hold their own with a band as well as Sherman does. Her wispy, girlish vocals command all the more attention for their understatement and lack of ornamentation; she leaves the solos and the embellishment to her able fingers and her highly skilled band.

On most of the cuts Sherman shares changes with guitarist Jim Wheatley and bassist Dave Green; and jazz elder Jay Leonhart (who lent his vintage bass to Green for the recording) backs Sherman's touchingly vulnerable vocals in a bass-vox duet on "Don't Worry 'Bout Me. On different tunes Sherman makes full use of two of New York's more prominent horn players—Harry Allen (tenor sax) and The Nighthawks leader Vince Giordano (bass sax)—but wisely pairs them on the Reg Connelly/Bud Flanagan song, "Under The Arches. Another winning pair-off: Giordano sings with Sherman in homage to Bobby Short in their charming take on the title cut (though Giordano is uncredited as a vocalist in the list of personnel).

Along with Sherman's standard offerings (Ellington, Porter, and Gershwin) are some unusual selections, among them a sunny version of "Carolina In The Morning (Walter Donaldson) and an infectious "Tennessee Fish Fry (Arthur Schwartz/Oscar Hammerstein). One sweet surprise: Johnny Mercer's little-known "Dream Awhile.

Sherman also demonstrates strong chops as a composer. Her original, "Welcome To Manhattan, is a romantic ballad that details the best the city has to offer. For aficionados of swing, Sherman most certainly belongs on that list.

Love You Madly; I Concentrate On You; Then I