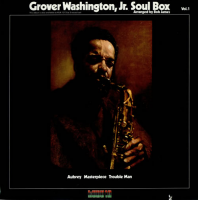 Jazz history is filled with the kind of stories that find yeoman musicians cutting their teeth under the tutelage of their elders. During the heydays of the '50s and '60s, the bandstand would also serve as a sort of "baptism under fire" for those eager to challenge the status quo and make their own stand for individuality. Along these lines, Philadelphia saxophonist Grover Washington Jr. perked the ears of producer Creed Taylor during the production of Johnny Hammond Smith's Breakout album in 1970. Subsequently, Washington would become a leader in his own right for Taylor's Kudu subsidiary, launching his recording career with Inner City Blues and All The King's Horses.

While this first spate of recordings would firmly establish Washington's position as a talent to be heard, it wouldn't be until 1975's Mister Magic that a large following would begin to track the saxophonist's every move, leading up to the groundbreaking and chart topping hit Winelight. However, in between Washington's first two Kudu sides and Mister Magic , the saxophonist recorded one of his most ambitious and far reaching projects; one that has somehow alluded many jazz fans no thanks to its dubious history in terms of packaging and production.

Originally released as a two-record set in 1973, Soul Box has in the past been issued as two separate volumes, both on vinyl and compact discs, although the CD versions were available for only the shortest of time. To this date, this set has never been reissued in its entirety and in a fashion that recalls the original packaging and graphics. It's a sad state of affairs for what is Washington's finest moment in the spotlight. With arrangements by Bob James, the saxophonist covers a diverse set of numbers including standards, pop ditties, and original material. In typical Creed Taylor fashion, the supporting cast is nothing short of top shelf, with Richard Tee, Ron Carter, Billy Cobham, Eric Gale, Hubert Laws, and Airto being just a few of the names on the roster.

The centerpiece here is a side-long romp through Marvin Gaye's "Trouble Man." Washington spins chorus after chorus without repeating himself and James' understated charts add just the right amount of color and flavor without distracting from the overall jazz feel. Stevie Wonder's "You Are the Sunshine Of My Life" also speaks with a definitive jazz voice and Washington's liquid tone envelops the tune's ingenious melody.

Maturity for jazzmen has often been equated with the ability to speak passionately in a ballad setting and in this regard Washington never flags from his responsibilities. Both "Don't Explain" and "Easy Living" find the saxophonist in peak form. His tone is lush and fervent, but never too sweet or saccharine. By contrast, funkier numbers like "Masterpiece" and "Taurian Matador" feature Washington at his soulful best in a style that has likely influenced scores of "lite jazz" saxophonists over the years but has never sounded quite as convincing in anyone's hands but this master.

Like many of the classic CTI and Kudu releases of the '70s, Soul Box speaks for different times but is somehow timeless in its message and overall excellence. For those who are only aware of Washington's more commercial oeuvre, it will come as a revelation. But for those of us well aware of his solid jazz credentials, this one remains an undeniable classic.