By HRAYR ATTARIAN
August 8, 2009
Sign in to view read count 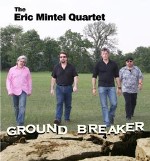 The title of a record may be misleading, and even when it promises more than it delivers, it doesn't necessarily mean that the music is of poor quality. Eric Mintel's Ground Breaker does no such thing but it is a solid, well above average effort in the post bop tradition.

The original tunes are all complex, intricate compositions by Mintel, allowing each musician plenty of solo space. The music has the loose swinging beat of 1950s Blue Note recordings, but the use of an electric bass instead of an acoustic gives a modern sensibility that does not seem out of place at all. The tunes alternate between modal and more standard bluesy hard bop, as well as subtle elements of western classical music. Although Mintel counts Dave Brubeck as his mentor and idol, his playing is more reminiscent of the lighter toned pianists of '50s jazz including Kenny Drew and Barry Harris.

The lone horn player in the group is Nelson Hill, whose sound on flute and alto saxophone is derivative—but not a mere copy—of James Moody's later work. The rhythm section, with electric bassist Dave Antonow and drummer Dave Mohn, deftly anchors the music and its members occasionally solo with quiet passion. The music is recorded on an old-fashioned console which, in addition to impeccable sound, this adds to the album's old school charm.

There is a unity of theme throughout, even when the sole standard, "When You're Smiling," is introduced. Unity, however, does not mean monotony because in their intricate improvisations and interpretations of the multilayered compositions, the musicians imbue the music with enough variety to maintain interest through more than one listen.

Unlike its title, Ground Breaker does not break new ground but is a high quality recording of post bop by a quartet of highly creative and talented musicians.

Ten on One; Reflection; Mojito Madness; Without You; Ground-Breaker; Taking a Chance; Naked Blues; Lonely Road; When You're Smiling; Lost Love.