By CHRIS MOSEY
September 17, 2011
Sign in to view read count 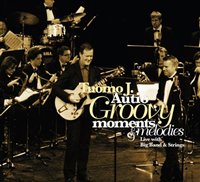 The word groovy probably derives from the groove of a record in pre-digital days. It first appeared in print in Really The Blues, the 1946 autobiography of jazz clarinetist Mezz Mezzrow, and became part of hippy terminology in 1965, when Simon and Garfunkel recorded "We've Got A Groovy Thing Goin,'" and the following year, when they put out "The 59th Street Bridge Song (Feelin' Groovy)." By the 1980s groovy had largely disappeared from the vernacular, and in the harsh economic reality of the present age it's probably politically incorrect to feel groovy.

Except, that is, in Finland where jazz guitarist Tuomo J. Autio has joined forces with The Great Helsinki Swing Big Band With Strings to spring Groovy Moments & Melodies on an unsuspecting world—a rather good, if somewhat idiosyncratic album.

Autio plays like his idol. Wes Montgomery. Managing to do this, standing up in front of the big band can be no easy task, but he gives a virtuosic demonstration of Montgomery's complex single note/octave/block chord approach.

He tips his hat to the master via Montgomery compositions "Bumpin'" and "Boss City," not to mention Lennon and McCartney's "Eleanor Rigby," for which Montgomery was nominated for a Grammy in 1968, and "Chim Chim Cheree," from Mary Poppins (1964), featured on the 1966 album Goin' Out Of My Head (Verve), which launched Montgomery's pop career.

There are also three of the better songs from Finnish composer and conductor Rauno Lehtinen, who died in 2006. He is best known internationally for his dire 1960s hit "Letkis," based on a Finnish folk dance, and the still more abysmal "Tom-tom-tom." The closer, "On Hetki," is perhaps the best Lehtinen number: a big ballad, with Autio fighting off an at times rather plodding string accompaniment.

Listening to this album is like passing through a time warp to the days when jazz did not feel it had to always be cutting edge and could now and again simply relax and be unselfconsciously, unpretentiously groovy.