By STUART BROOMER
April 5, 2008
Sign in to view read count 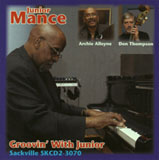 Nearing 80, Junior Mance is among the last still-vigorous performers of his generation, the master of a blues-drenched piano style that fuses bop harmony and block chords with tremolos and funky pentatonics. His biography is also his tradition, including stints with Gene Ammons, Cannonball Adderley, Dizzy Gillespie and Dinah Washington.

Mance has visited Toronto for decades, frequently performing at jazz piano bars like Café des Copains and its successor, the recently closed Montreal Bistro. Since 1995 his Toronto performances have featured a regular trio with bassist Don Thompson and drummer Archie Alleyne, the former best-known outside Canada for his tenure with the original John Handy Quintet and the latter a veteran whose career reaches back to sideman appearances with Billie Holiday. Together they form a tight-knit trio, Alleyne a sparkling complement to Mance's immense swing and Thompson providing fluidly guitar-like solos as well as resilient bass lines.

They made a superb recording in 1996 called Milestones (also on Sackville) and Groovin' with Junior is a 2006 commemoration, recorded in a studio with a live audience. It's joyous, swinging music that's utterly unlike the studied practice of younger mainstream musicians, happily shifting between such modern jazz anthems as Thelonious Monk's "Ask Me Now" and Milt Jackson's "Bag's Groove" and ballads like "Stormy Weather." The material is mostly standards, with Mance's "Blues for the Bistro," a characteristically ebullient performance, the only original. In all, it's a jaunt through terrain that's likely familiar but highly engaging.

Falling in Love with Love; Ask Me Now; Blues for the Bistro; For Dancers Only; Bags Groove; Stormy Weather; The Theme.